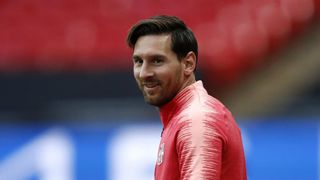 Manchester City will offer a trio of first team stars to Barcelona in a bid to sign Lionel Messi this summer. The Premier League club remain hopeful that the Argentine could be secured on a free transfer, but have made it clear they are willing to offer cash plus players if necessary.

Messi’s announcement that he wants to leave Barcelona club after 15 years as a professional has alerted a number of the world’s richest clubs to the possibility of signing him - he handed in an official transfer request earlier this week. There remains some discrepancy over his release clause, however, with Messi believing he can leave for free and the club insisting he has a €700m buyout fee.

According to Spanish outlet Sport.es, Manchester City are lining up a deal which would see striker Gabriel Jesus, 23, attacking midfielder Bernardo Silva, 26, and defender Eric Garcia, 19, go in the opposite direction. City were already resigned to losing the latter after Garcia made it clear he will not assign a contract extension, though fans may be dismayed to hear the other two are also being packaged into the deal.

MESSI Why does Lionel Messi want to leave Barcelona? How the perfect football relationship broke down

Jesus has been a diligent understudy to Sergio Aguero since signing for the club in January 2017. The Brazilian has scored 41 goals in 102 Premier League appearances, with many believing him more than capable of leading the line for years to come.

Silva, meanwhile, has become a cult hero at the club, with his tenacity and workrate valued just as highly as his skill and technique. The Portguese midfielder has scored 30 goals in 156 games since joining from Monaco in 2017.

TRANSFERS How would Thiago Silva fit in at Chelsea?

Messi, 33, is arguably past his prime, and would demand astronomical wages. It is felt, however, that a player of his abilities would help the club's bid to win a first Champions league title.

Messi is widely believed to be the greatest player of all time, having scored 634 goals in 731 appearances for Barcelona, his only professional club. The six-time Ball d’Or winner has won four Champions League titles, 10 domestic titles and six Spanish Cups during his time in Barcelona.