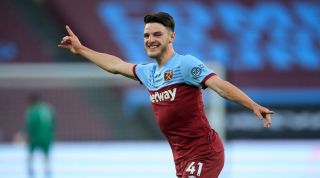 Nemanja Matic has generally performed well since his return to the Manchester Unitedteam earlier this year. Although Fred and Scott McTominay have had good seasons, Matic is the natural choice to anchor the midfield behind Paul Pogba and Bruno Fernandes.

The ex-Chelsea man turns 32 next month, though, and he will struggle to play week in, week out for a full campaign. With Matic's mobility decreasing, United should be in the market for a long-term successor this summer.

Rice is a contender. The England international has again been essential to West Ham's fortunes this term, and at 21 he could have a long and fruitful career at United.

The Hammers will be desperate to keep hold of their prized asset, but every player has his price.

Few clubs in European football can match RB Leipzig's record for developing players in recent years, with Laimer among the latest to emerge as a star in the making.

The Austria international is an integral part of Leipzig's high-energy, heavy-pressing approach. He's an all-action midfielder, full of running and never afraid to put a foot in, as evidenced by his 3.1 tackles per game this season - more than any other midfielder in the Bundesliga.

Laimer is a good passer and helps to build the play from deep, but his main duty when his team are in possession is to snuff out opposition counter-attacks.

Recent reports in Italy linking Tanguy Ndombele with a move to Inter suggested that Brozovic could be used as a makeweight in the deal. That suggests the Nerazzurri would be open to losing the midfielder if the circumstances were right.

Brozovic has enjoyed a fantastic season under Antonio Conte, but his contract status will give hope to potential suitors - the Croatian only has two years to run on his current deal.

United's midfield would be improved by the presence of Brozovic, whose combination of aggressive tackling and intelligent passing makes him a worthy candidate for the deep-lying role at Old Trafford.

While Matic is nearing the end of his career at the highest level, Camavinga is only just beginning his. As such, the 17-year-old won't be ready to make 50+ appearances for United next term.

As prospects go, though, he's right up there. The teenager took Ligue 1 by storm in 2019/20, playing 36 times in a variety of midfield roles.

Solskjaer would have to smooth out some of the rough edges in his game, but Camavinga's potential is there for all to see.

If United think Matic has another season in him - which, given they offered him a contract extension, seems to be their judgement - Camavinga would be an exciting addition this summer.

Another Austrian midfielder who's caught the eye in the German Bundesliga, Grillitsch is another player United should be looking at.

The Hoffenheim man is an expert at breaking up opposition attacks, with his intelligent positioning helping to protect his team's backline. He's an asset in possession too, and thrives at picking out more advanced team-mates with quick, sharp passes.

Grillitsch, who was linked with Tottenham in the January window, is another player who only has two years to run on his contract. United should consider testing Hoffenheim's resolve this summer.

LISTS The 26 maddest managerial sackings of all time