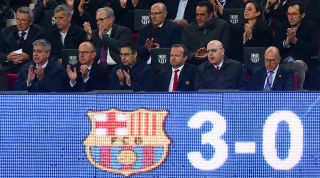 Executive vice-chairman Ed Woodward has announced Manchester United’s latest set of results for club shareholders – and it’s record revenues of £627.1m. Something to cling on to at night for beleaguered fans, we’re sure.

In a conference call on Tuesday, Woodward revealed a breakdown of the club’s finances and admitted that revenue results in 2020 were likely to be nearer £560-80m thanks to the Red Devils’ participation in the Europa League.

Pre-empting the unpopular news on Monday, a club spokesman told ESPN that, “Everyone at the club, from the owners down, is focused on competing for and winning trophies at the highest level. To do that we have invested heavily in the playing squad and will continue to do so.”

They weren't wrong: no Premier League club spent more than Manchester United last summer, thanks to their combined £145m outlay on Harry Maguire, Aaron Wan-Bissaka and Daniel James. This was offset somewhat, however, by the £74m sale of Romelu Lukaku to Inter Milan.

Either way, United fans have grown tired of off-field economics not being reflected in their team’s performances. But these are the headlines from their latest set of results...

This is a big bone of contention for Manchester United fans furious with the Glazers’ takeover in 2005. Their arrival heaved debt onto the club for the first time since 1931 – all £790m of it, as United went private – but they have still been paying out dividends to their shareholders for over four years, including all six of Malcolm Glazer’s children. Avram and Joel are executive co-chairmen, while Kevin, Bryan, Darcie Glazer Kassewitz and Edward are on the club’s board of directors.

Don’t worry, we haven’t fallen on our keyboard. That’s ‘earnings before interest, taxes, depreciation, and amortisation’, which according to Investopedia is “a measure of a company's overall financial performance and used as an alternative to simple earnings or net income in some circumstances”. Operating profit was £50m, which was roughly Alex Sanchez’s weekly wage at Old Trafford. We think.

Thanks to the new Champions League broadcasting rights agreement, United earned 18% more from TV rights – up to £241.2m from £204.2m.

In 2017, BT Sport shelled out £1.2bn for the rights to show Champions League matches until the season ending 2020/21 – 35% more than their previous deal. But because of their Europa involvement in 2019/20, United will see a much smaller slice of the pie.

Ole Gunnar Solskjaer made no secret of building for a long-term project after United’s abysmal end to 2018/19, but there’s no guarantee he’ll be allowed to see it through as a relatively rookie manager. His side’s start to the current campaign has been weak, and there’s unenviable work ahead hacking down yet more deadwood cluttering the books.

Woodward reaffirmed United’s commitment to signing for the future, however, but admitted it was “important to be patient… we won’t be distracted”.

Woodward: "Youth led, attacking football is the right way forward. Resolute in our desire to get @ManUtd back to top. Long term approach to building squad is right one.— Simon Stone (@sistoney67) September 24, 2019

5. The world is a cruel, dark place

Someone has just asked on the United investor call what a player loan is ...— James Ducker (@TelegraphDucker) September 24, 2019

QUIZ! Can you name every team Lionel Messi has scored against in the last 12 months?

WATCH Premier League live stream 2019/20: how to watch every game from anywhere in the world