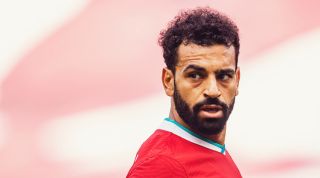 Jurgen Klopp’s Liverpool know the challenge ahead of them this season: win the title again and get the celebrations that they deserved last time out. To receive the Premier League trophy in front of the Kop, to soak up the adulation from the fans and embrace an atmosphere that was not there on the night they lifted it in July. That will be the driving force behind their 2020/21 season.

What might happen along the way between now and the final day on May 23, 2021? We take a look.

Just seven wins in the last 16 competitive games in all competitions would typically be cause for concern for any club. However, Liverpool effectively haven’t played a truly competitive fixture in almost six months, the last being their Champions League tie to Atletico Madrid - the final game to be played in England before lockdown in mid-March.

Therefore, perhaps the most difficult task for Jurgen Klopp is to get his side playing with the tempo and intensity that they have become renowned for and that saw them march towards the title in such an efficient manner before the break.

The early fixtures look pretty tricky for the reigning champions; Marcelo Bielsa’s Leeds first up could offer quite the surprise, while Chelsea’s all-new attack will be out to lay down their mark in Liverpool’s first away game. Then there’s Arsenal before September is out, who have already beaten Liverpool this season in the Community Shield.

When Klopp’s side retained the Bundesliga title in 2011/12, they started the season with just two wins in their opening six league games - then went undefeated for the remaining 28.

Mo Salah’s goalscoring record since joining Liverpool three years ago reads: 44, 27, 23. In the league, it’s 32, 22, 19. Last season saw his lowest numbers and the first time he hadn’t been named the Golden Boot.

Indeed, he has just 5 goals in his last 16 games - way below his previous almost 1:2 rate.

We’re safely expecting him to return to form this season and hit over 25 league goals this time out. Defences could be struggling with fatigue and Mo could profit nicely.

LIVERPOOL'S PREMIER LEAGUE WINNERS The best right-back in the world? How Trent Alexander-Arnold is reinventing the full-back

Similarly, Roberto Firmino had his worst goalscoring season in five seasons at Anfield last time out, with just nine league goals. His first home league goal arrived in the final home game of the season.

However, with Naby Keita seemingly finding form and looking set to play a larger part in the coming season, Firmino could be one to profit from the Guinean’s more creative play from the middle of the park.

Also, Klopp has opted for a 4-2-3-1 shape in pre-season, which could see Firmino finding space arriving into the box with defenders ahead of him more occupied by the likes of Salah, Sadio Mane and Takumi Minamino.

Virgil van Dijk played every minute of every Premier League game last season, the first Reds’ player to do so since 2010/11, and also made it two consecutive seasons of appearing in every league match, the last Liverpool player to have done so was Steve Nicol over 30 years ago.

But with the condensed season ahead you can safely bet that Van Dijk won’t be able to make it three seasons without missing a league match.

Even if Van Dijk did play every game, he’d still be a long way from Phil Neal’s incredible six consecutive seasons without missing a game between 1976 and 1983...

Numerous times Klopp’s side were denied what looked like a very clear penalty even with the use of VAR, but such was their relentlessness in winning every match that the non-decision was never discussed after.

Expect more penalties for Klopp’s side this season.

How do you follow up a club-record 97 points? By getting 99 the following year. That was what Liverpool have done in the last two seasons.

The nature of the season ahead, with a condensed schedule, European football crammed in and still the same amount of internationals - which could well see players ending up in quarantine - means it’s highly unlikely any team will be getting over that 90-point mark, consistency might be difficult to achieve.

Ultimately, though, that should not affect Liverpool in their pursuit for title number 20. Klopp’s side are being written off by some before a ball has kicked, but they showed consistently over the last two seasons that they are relentless in their drive for success.

Just as with Dortmund, Klopp overcome big-spenders before in Bayern Munich, and he knows the challenge now is a new one, to retain the title for Liverpool for the first time since 1984 - and in doing so give him, his players and the supporters the double title party they all crave.