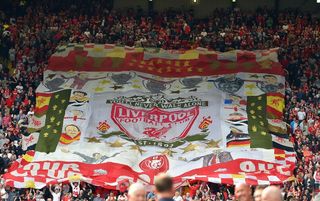 You'll Never Walk Alone is the favourite chant of Liverpool fans, according to an online survey carried out by FourFourTwo and Liverpool sponsors Standard Chartered – and fans were able to hear it during the Reds' trophy celebrations following the match against Chelsea.

It's been 30 years since Liverpool last lifted a league title, and the wait is finally over.

While Jurgen Klopp's side secured their champions status earlier than any previous winners, we had to be a little patient to see them lift the Premier League title. That ceremony took place after their final home game of the season to Chelsea on Wednesday, July 22.

Sadly, Anfield was empty. For any club in this position, that would be a crying shame – but for Liverpool, it might mean even more. The sound of the Kop in full voice is one of football's most incredible experiences.

That's why club sponsors Standard Chartered set up the Stand Red Soundboard, allowing fans to watch Liverpool from home with the experience of being at the game.

Using genuine recordings of Liverpool fans, mixed live as real-time match reaction, supporters could enjoy the sounds of Anfield by going to Standard Chartered's YouTube page for each Liverpool kick-off for the behind-closed-doors games.

And to involve fans even more in this historic success, they wanted supporters to choose what Kop chant should be.

Thousands of fans cast their votes, and the results was overwhelming – if not entirely shocking. With almost 70% of the vote, Liverpool supporters chose You'll Never Walk Alone to soundtrack the special moment.

While Liverpool players themselves chose Coldplay's A Sky Full of Stars to blare out at Anfield during the trophy presentation, those opting to listen to the Stand Red Soundboard instead got the sense of a full Anfield singing its heart out.

If you've ever wondered why You'll Never Walk Alone is so special, we asked This Is Anfield's Matt Ladson to explain.

"You'll Never Walk Alone is much more than a football song, with its emotive lyrics meaning it's played at weddings and funerals around the world," he said.

"There's been some spine-tingling renditions at Anfield and we all have our favourite hairs on the back of the net moments, but perhaps none has been more inspiring than when it was sung by 40,000 Reds at half-time in Istanbul.

"'YNWA' itself has become a symbol of Liverpool FC worldwide."

Relive that moment by going to Standard Chartered's Soundboard for the Liverpool vs Chelsea match and hear the sound of You'll Never Walk Alone.

FourFourTwo.com created this content as part of a paid partnership with Standard Chartered