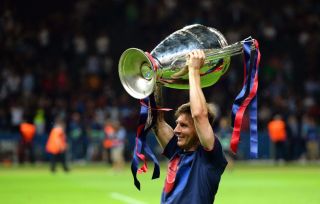 Pep Guardiola had crafted an answer with impeccable logic. The Manchester City manager is often asked a variant on the same question: if his side are the favourites to win the Champions League, or should win it, or have to win it. His answer normally involves history and citing the greater European pedigree of the serial winners.

There are times, however, when he has replied with a question of his own. “Who does Messi play for?” he asked rhetorically in December 2017, at a point when City had reeled off 18 consecutive Premier League victories. “Then they are the favourites.”

The pernickety may point out that, in Guardiola’s four years in Manchester, the team Messi plays for have not won the Champions League; indeed, Barcelona have reached a solitary semi-final, and that is remembered more fondly on Merseyside than in Catalonia. Perhaps, then, Guardiola is simply a bad tipster. Maybe his predictions are trapped in the past, based on a personal history when the Barcelona side with Messi in it and which he managed represented the favourites every year after their 2009 triumph. Possibly he is faulting his successors at the Nou Camp for failing to take a team with arguably the greatest player in history to heights they had scaled earlier.

Whichever, Guardiola will have destroyed his own excuse for European underachievement if City do sign Messi. By their manager’s own reasoning, they will be the favourites. They will possess the player who is such an innate advantage that they ought to prevail.

His 2017 response was no doubt conjured to reduce the burden of expectation on City and presumably fashioned in the belief he would never manage Messi again, but unless Guardiola ends his own decade-long wait for a third Champions League, he may be condemned by his own analysis.

In the meantime, he might require some mental gymnastics to anoint someone else the likeliest winners – and for those who have not spent the last four years insisting that anyone with Messi merits that billing, the all-conquering Bayern Munich side belong in pole position – but it will also heighten the focus on him should City find another way to exit Europe with their ambitions unrealised.

But there is also a wider question if one player, even a serial Champions League winner who has long felt far superior to virtually all of his peers, represents the competition’s cheat code. It is a theory that has been tested in the last two seasons with negative results.

Juventus signed Cristiano Ronaldo to win the Champions League and, by the most demanding of criteria, that deal has been a failure. By others, of course, he has succeeded. Ronaldo has 65 goals in 89 games, including a club-record 37 in a season, he has won back-to-back Serie A titles and raised Juventus’ profile and marketing value, but quarter-final and last-16 defeats were not what they envisaged for a €100 million outlay and colossal wages on a player with minimal resale value. Exits to Ajax and Lyon featured four Ronaldo goals but showed an ageing great cannot always compensate for collective failings.

Ronaldo moved at 33, as Messi may now do now, and potentially for a similar fee. Their ludicrous goalscoring exploits have supported the notion that one individual is the secret to success when the evidence of Bayern and Liverpool’s Champions League wins is that collectivism featuring high-class players is instead the more potent formula. It was one Guardiola harnessed at Barcelona, boasting both the best team and the best footballer. And yet his idea that Barcelona were always favourites because they had Messi could lend itself to the suggestion that the Argentinian, and not Guardiola himself, will be the decisive factor if City do win the Champions League. And if they do not, assuming they have Messi in their ranks, Guardiola can be damned by his own words.