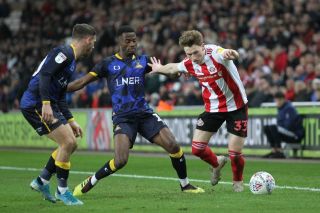 There are no certainties when approaching the League One table.

All three relegated Championship sides are in dire straits. No one can be sure when sleeping giants such as Sunderland, Portsmouth and Ipswich will wake up. Everywhere you look, the spectre of financial disaster looms.

After the effects of coronavirus, a season that finishes with 24 teams would be considered a success.

But how might they look? We teamed up with EFL experts the Not The Top 20 Podcast to help us out with our Season Preview issue – on sale in shops and online now.

Looking for other league predictions?

Some supporters have lost faith in boss Kenny Jackett, but no side picked up more points than Pompey from October 22 last term, so it was only a slow start that held them back.

Their squad remains littered with quality and Jackett is the man to lead it.

Peterborough's performances in March were as good as any in League One, and they'll gladly tell you that promotion was inevitable before COVID-19 hit.

Even losing Ivan Toney won't be a total disaster, due to the usual sound recruitment by Posh.

It's yet another new dawn at the Stadium of Light, this time with a League One specialist leading the way.

Boss Phil Parkinson was beginning to win over the fans before lockdown, so there'll be promotion expectations. Steady progress may be more realistic.

Beware the wounded Joey Barton, who has over 100 games as manager under his belt, and has shown himself to be more than capable.

The U's blew their big chance to play in the second tier for the first time this century – they did, however, retain Karl Robinson, whose reputation is rising again.

A young squad's been bolstered by a permanent arrival for Matty Taylor, who will relish his return.

It's not hard to be impressed by the recruitment team's busy work. Pinching Keshi Anderson from Swindon, as well as Jerry Yates – on loan with the Robins last term – is a smart move. Neil Critchley should have squad capable of reaching the play-offs.

Ipswich handed Paul Lambert a new five-year contract amid poor form in January, yet things only got worse.

Both club and manager appear tasked with making the best of a situation that suits neither. Improvement may come from a summer reset.

Doncaster appeared capable of breaking into the promotion reckoning at times last year, only to be undone by inconsistency.

If Darren Moore is to truly make his mark on the Football League, he will need to address that and replace Kieran Sadlier's goals.

Steve Evans' record in this league is as good as anybody's, but this Gills side didn't live up to that last season. Scoring just 42 goals stunted their ambitions, so Evans must tap into his previous good work with strikers to elevate expectations.

Expect more from the Imps this season. Michael Appleton made do with a squad built to play very differently from his own way, and just as he toiled at Oxford before winning promotion in his second campaign he should give Lincoln the edge in 2020/21.

The 2019/20 side would've taken their swagger into League One but Eoin Doyle, Jerry Yates and Keshi Anderson scored 44 goals between them, so losing all three obliterates Swindon's attack.

Richie Wellens can create another slick side nonetheless.

This prediction could end up looking very low if the Addicks find their third owners of 2020 and hold on to Lee Bowyer, but the EFL blocked a takeover from ESI in August.

Amid much boardroom chaos, the current situation is worryingly uncertain.

It's two in two for Ryan Lowe, but he'll be hoping this promotion goes better than Bury's did.

Antoni Sarcevic is a big loss; nevertheless, Argyle return to this tier stronger than they left it, and they've added Frank Nouble from Colchester.

Hull sat 8th in the Championship on January 1. Then a run of one win in 20 league games, made possible by the deadline-day sales of Jarrod Bowen and Kamil Grosicki, sent them down in last place.

Will Assem Allam sell up, provide investment, or neither?

Alex were promoted with a team filled with academy graduates playing attacking football. As ever, success depends on how many they can keep.

With David Artell in charge, though, there's no reason why the Railwaymen can't keep rolling on and on.

Russell Martin was thrown into the deep end last November, hanging up his boots toreplace Paul Tisdale as manager.

Yet an underachieving side responded to him, survived, and should have enough to do so again, with or without new man Richard Keogh.

The Gas ended 2019/20 poorly after Graham Coughlan left to be replace by rookie manager Ben Garner, who took 10 points from 15 games.

Nevertheless, there's optimism that he'll get a tune from eye-catching signings such as Coventry's Zain Westbrooke.

An enforced early end to the 2019/20 season suited Sam Ricketts, who had lost seven of his last 10 matches and might not have lasted until May.

A poor start could bring a change in the dugout – and Josh Laurent leaving to join Reading makes Ricketts' task that much harder.

It's impossible to know how this team will look. Without a points deduction, Wigan would be 13th in the Championship; instead, the effect of administration and relegation will be huge.

Paul Cook has gone. Assets will be sold. It will get worse before it gets better.

Accy's overachievement makes it easy to forget how each year of League One survival is a job well done.

Wycombe can inspire clubs on a budget, although Stanley will always be competitive under John Coleman. Cameron Burgess is a shrewd addition in defence.

Despite flirting with the drop, Rochdale were happy after their first full season without Keith Hill since 2012/13.

Brian Barry-Murphy has changed their playing philosophy – but his summer business needs to make them more ruthless than toothless this time around.

As one of the Football League's best-run clubs, Burton were swift to react to football's changing financial climate by appointing first-time manager Jake Buxton too replace Nigel Clough.

But they punched above their weight with Clough, and he's hard to replace.

The release of 11 players in the summer suggests the budget may be tighter than ever. Glyn Hodges deserves some credit for keeping Wimbledon up, and his remit will be the same again.

Anything but a relegation scrap would come as a huge surprise.

Their play-off opponents couldn't cope with an efficient, attritional style that wasn't in keeping with underwhelming performances prior.

Callum Morton is unlikely to return on loan, while 13 players have moved on, including Jordan Turnbull. It's likely to be a slog.