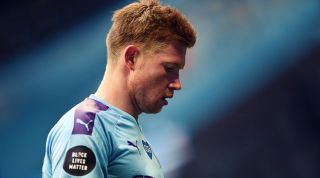 This has been the weirdest season in the Premier League’s 28-year history. Of that, we can be sure.

Weirder than the year that Leicester City inexplicably won the thing, or when West Ham United got 42 points and still went down. Weirder than Norwich City climbing to third with a -4 goal difference and even weirder than the era that Newcastle United’s John Carver claimed he was the best coach in the league, before offering to fight his own fans.

Footballers performing in hollowed out shells of stadiums, as we all watch housebound, with recorded chants for company, has contextualised the word “weird”. And in a year-long league campaign of ups, downs and dystopia, we’ve all looked to routine for reassurance. Some players in the Premier League, you can set your watch by – it’s good to know that some things will survive what seems like the end of the world.

THE CASE FOR... Why Jordan Henderson fully deserves to be crowned Player of the Year

THE CASE FOR... Why Virgil van Dijk is the Premier League Player of the Year

Kevin De Bruyne is the prime candidate to; he could probably survive on Mars without a spacesuit. He is impenetrable; a rapid-fire rifle of a footballer – Steven Gerrard’s body with David Beckham’s consciousness uploaded. But it’s not because the Belgian has been comfortingly consistent that he deserves the Premier League Footballer of the Year title – the football writers' award announced this Friday – it’s because this is his defining campaign: one in which no one has been near his level.

The statistics tell half the story. Nineteen assists and 11 goals in 34 Premier League starts is his best return yet, but the manner in which the strawberry-blonde assassin has taken to leading Manchester City is at an unparalleled level right now.

De Bruyne is a very specific genre of footballer – the latest in a long line of “Sod it, I’ll do it myself” midfielders, imbued with game-changing talent and high-octane work-rate in equal abundance. There’s something about that kind of player that we really take to, on these shores; this season, he’s eclipsed Bernardo Silva’s efforts last campaign, he’s been better than Jack Grealish, James Maddison, Dani Ceballos, even Gini Wijnaldum or Bruno Fernandes.

And it's telling that the man’s only criticism is that he plays football like a robot; that watching City under Pep Guardiola is like reading a book written by predictive text. It's a nitpick at best; a playground insult that the David Bowie of Eastlands - the flame-haired superstar of Pep Guardiola's refined philosophy - is no Xavi or Iniesta, or Thiago. That he's not as cool as Pep's earlier work.

In truth, KDB might have proven this season that he's something more important - that he's a template for future midfielders to model themselves on. Has a world-class, creative winger ever seamlessly morphed into a dominant, complete midfielder like this, and done so to such a level? Arguably not.

If anything, we’ve normalised this man’s ability. The Belgian had 15 assists by February, in a wobbly City side. That’s after coming back from two ligament injuries last season too – which follow 18 and 16 assists respectively in Pep Guardiola’s first two seasons. He's been whipping balls into boxes both sides of lockdown like each one will chisel him into history. Three elite seasons in four proves he's not a fluke.

At a time where defences are compacting and Liverpool are lightyears ahead of anyone, that level of individual performance is remarkable. Imagine if De Bruyne had a defence that didn’t haemorrhage goals in transition.

Of course, any of Liverpool’s champions would make a worthy recipient of the Footballer of the Year award. Jordan Henderson has been sturdy, if not unspectacular, as the beating heart of Jurgen Klopp’s masterpiece. Sadio Mane and Mohamed Salah have taken turns in the spotlight; Trent and Robbo are full-backs of the ilk that we’ve barely seen before; as fans of the sport, we're close to collectively running out of metaphors for Virgil van Dijk's strength and supremacy.

But none of them have carried a team like Kevin De Bruyne has. None of them have put in a season like this. He was considered a star this time last year; this year, he's cemented himself as one of the defining midfielders to have played in England. He should be in the league of Gerrards, of Lampards, of Beckhams and Ballacks, Fabregases and David Silvas.

In the cliche of uncertain times, he’s been Groundhog Day; in a dysfunctional City team, he’s been reliant. If we don’t recognise his genius this time around, we never will.