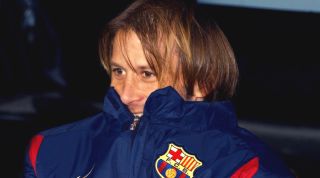 Former Barcelona and Spain star Gaizka Mendieta says that his former club do still have a chance in the Champions League - but that no one knows which Barça is going to turn up right now.

Mendieta went on loan to Barcelona for the 2002/03 season from Lazio, where he was knocked out of the Champions League quarter-finals by Juventus. Previously, the midfielder was a member of the Valencia side which reached two consecutive Champions League finals and lost them both in the early 2000s.

Speaking to FourFourTwo as part of BT Sport's Club 2020 campaign, celebrating return to Champions League football - complete with a European-themed ice cream van all branded up and selling ice lollies - Mendieta claimed that despite the issues that the Catalan giants have had this season, no one can write them off.

"The only question mark is how they’re going to perform in the game - which Barca is going to turn up? The one that isn’t great defensively and struggles to score goals? Or the one that plays well and finds an edge easily?"

"I hope it’s the second but they’re very unreliable. I think they have a chance though."

Mendieta also talked about Barcelona captain Lionel Messi and the possibility that the Argentinian talisman could perhaps be at another club next season.

Barcelona are sweating on the No.10 signing another deal at Camp Nou, amidst reports of unhappiness in the camp. Mendieta has in the past confessed to being a huge fan of the star, even stating that he prefers him over Cristiano Ronaldo, in the age-old debate of the two legends.

When asked if he was worried about Messi leaving La Liga, Mendieta replied, "Well yeah, of course. That is one option that I’m not sure of."

"Not just as a Barca fan but a La Liga fan, a football fan… it’s one of the greatest stories in history, a player like him that has spent his whole career at one club. That’s something that you don’t get to see very often," he continued.

"We’ll have to wait to and see what happens - I’m not sure what will happen but we will have to see after the Champions League."