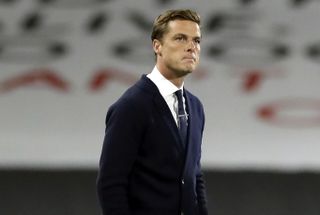 Wait, haven’t we been here before? Three games into a new Premier League season - just two months on from the ecstasy of their play-off final victory at Wembley - Fulham have been relegated.

“I am as certain of that as I am about Liverpool winning the league,” said a disgusted Jamie Carragher in the Sky studio following Monday's abysmal home defeat to Aston Villa. We can all forget the remaining 35 games, this team is doomed, according to the former Liverpool defender.

Fulham weren’t merely beaten here, they were destroyed, with the game over after 15 minutes - the score already 2-0. Scott Parker’s side, marshalled by two centre-backs - Tim Ream and Dennis Odoi - who failed to cope with the pace of the Premier League two years ago, folded like soggy cardboard before the sun had even set behind the demolished Riverside stand.

The structure has become a fitting backdrop to a half-formed team, and Parker may be tempted to pull a shirt over a couple of those iron girders and play them either side of Michael Hector. They may even be an upgrade in terms of mobility.

The need for quality players is clear and has been since the Wembley win. At least one experienced defender, a striker capable of competing with Aleksandar Mitrovic and, ideally, a pair of creative wingers top the shopping list. Will Parker get any of those things?

“Honestly, I don’t know,” he told reporters in the virtual press conference after the game. This wasn’t a cliche of an answer either; a hopeful wink and nudge to the owners. The genuine ignorance in his voice was clear. This is a man who doesn’t have any idea what those upstairs are up to.

Perhaps Parker could ask supporters? Tony Khan, Fulham's sporting director and the son of billionaire owner Shahid, took to Twitter after the final whistle to engage with the club's understandably upset fanbase. He’d tried to bring in players, he explained, but there’s this thing called the Coronavirus, you see, perhaps you’d heard of it?

I apologize to @FulhamFC supporters for our performance tonight. We’ve looked to add centre-backs since Wembley, I’m sorry we haven’t yet as 2 got COVID + we lost a Free we thought was close + had another issue with a 4th CB. I promise players in + better efforts from this squad.September 28, 2020

IN THE MAG Inside the new Manchester United, Pirlo the manager, Rush, Drogba, Bury, Belarus, latest signings and more

There has long been a suspicion among Fulham supporters that Khan has his fingers in too many pies. The 37-year-old also plays a leading role in the professional wrestling and NFL franchises owned by his father. He combines those duties with helping to identify and sign players for the Premier League club. With just six days to go before the transfer window shuts, fans will be praying the spandex tights take a backseat.

If they don’t, there will be nobody else to blame for a third top-flight relegation in the seven years Khan and his father have run the club. A proper sporting director would undoubtedly improve things, not least to appease the fanbase and take Khan out of the firing line. Parker, and supporters, would then have an experienced talent-spotter they could direct their complaints and desires towards.

If the same old issues remain for much longer, Fulham's status as a Premier League club will be the least of their worries. Fans, the manager and owners are at breaking point right now and things will likely get even worse over the coming days, with a derby against Brentford in the Carabao Cup preceding Sunday's trip to Wolves.

Contrary to Carragher's assessment, Fulham aren’t yet relegated, but they will be by this time next week unless drastic changes are made immediately.