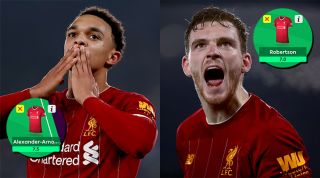 FPL is a science as much as an art. Who do you choose for each position?

Fear not. We’ve got the answers - backed up by statistics. Check out our top five defenders, midfielders and forwards, based on points per million figures.

Defenders are an odd bunch in FPL. So who do you pick? Someone from a big team who’ll chalk up the clean sheets and deliver reliability? A marauding full-back who has the potential to steal an assist from time-to-time?

A midtable brawler who’ll grind out the odd 0-0? All of the above? Read on...

Tarky is only worth £5.5m on FPL, meaning that he’s one of the best-value options for your rearguard. He’s guaranteed to start, too. If only there was an English quota in the game…

Curiously, John Egan didn’t play as many minutes as some of his teammates. He’s worth more than Chris Basham and the same as George Baldock and Enda Stevens. He managed more goals though and perhaps delivered on the bonus points - awarded to the top three players of a match.

SEE THE KEEPERS FPL tips: The 10 best-value goalkeepers to pick for your Fantasy football team, according to statistics

Maybe it’s easier to stand out as the central defender when everyone else is charging forward.

It’s perhaps no shock that Liverpool’s record signing is one of the best-performing defenders in FPL - equally, it’s not exactly a shock that his whopping £6.5m price tag drags down his points per million score.

Having just signed Matt Doherty from Wolverhampton Wanderers in real life for £15m, Spurs are hoping that this bargain buy can deliver the same capability in attack for them while contributing better to the defence than Serge Aurier ever could.

Doherty was phenomenal at Wolves and would be a  no-brainer for FPL this season, but the Spurs move comes with caveats. He’s used to a back three rather than Jose Mourinho’s back four, so beware that he may not produce the same defensive performances. Serge Aurier is still there too (for now), so there’s a little more competition for places. His dynamic has shifted.

Despite costing £7.5m, Trent delivered four goals and 13 assists in a defence that also kept 13 clean sheets. That’s midfielder output - there’s no surprise that there are still calls for Alexander-Arnold to be tested in Klopp’s actual midfield - so make the most of it and stick him in your side.

It’s a funny quirk of FPL that players like Mohamed Salah can be deemed to operate in the same space of the pitch as players like Granit Xhaka.

We know that’s not the case in real life: nevertheless, the midfield is arguably the most important part of the pitch in this strange old game...

Riyad Mahrez faces competition from Bernardo Silva, Ferran Torres and potentially Lionel Messi for his spot in the City side this season. Not to be envied, but he still amassed over 20 points per million last season, as he showed himself to be one of Guardiola’s more unpredictable players (in a good way). It’s likely that he’ll start the season - even if he doesn’t get much game time as the campaign wears on.

It’s somewhat curious that Arsenal brought Willian to the club, considering the wealth of options that they have in wide areas of the pitch.

But while Willian chalked up a few assists for Chelsea last term and was the reliable older head in a younger Blues squad, it wouldn’t be a bad bet to guess he’d do the same again this season - but it’s not a dead cert either.

Recent recipient of an England call-up and cult hero for Aston Villa, it’s perhaps no surprise to see Jack Grealish as one of the best-value players in FPL, given that he’s only £7m and effectively Villa’s biggest creator.

Kevin De Bruyne is half a million cheaper than Mohamed Salah or Pierre-Emerick Aubameyang. Granted, his job is to create more than it is to score but when you deliver with the robotic reliability of the Belgian, it seems like a no-brainer to include him in your side. At least it does according to our stats.

Will he still be as prolific with no David Silva to his left? For our money, yes. And he’s the only City player have who seems remotely capable of taking a penalty.

The cheat code of the 2019/20 Fantasy Football season, John Lundstram racked up a ridiculous number of points for Sheffield United - simply by being mislabelled as a defender.

This is a really important point and a strange way to end this list: do not expect Lundstram to deliver anything close to his points per million total of last season. He was receiving much higher points for scoring and assisting - since goal contributions are valued higher for positions further back - and he isn’t likely to produce the same numbers.

It’s tempting to start building an FPL team around the forwards. After all, those are the ones that get you goals. And goals mean points. Points mean prizes.

Still, there has to be a shrewdness about who to choose. You don’t just go out and throw all your money at the most expensive striker - look at how that worked out for Manchester United signing Romelu Lukaku.

Last year’s Premier League top scorer is consistent, proven over a number of years at this level and playing at a club in the top five. Surely he’s a must-pick?

Just hope that Leicester pull their act together from the end of last season.

Jordan Ayew has been in and around the Prem for years. It was a big of a surprise to see him rack up so many points last season, especially as he’s only worth £6m on FPL this time around.

Who are you picking - Ayew or Mitrovic? Both are the same price. Crystal Palace really need to buck their ideas up (they haven’t won since the first weekend of lockdown), but Ayew has at least got Ebrechi Eze behind him this season to create. He may prove to be a one-season wonder or he might be a safer bet than a lot of players around his value. Are you feeling lucky?

Last season, Anthony Martial was down as a midfielder in FPL. It’s important then to take his points per million total with a pinch of salt.

Statistics aside, however, the eye doesn’t lie. Martial was the tip of the 4-2-3-1 that went unbeaten in the league from February onwards, netting freely, including that hat-trick at home to Sheffield United. At £9m, he is easily the best value of the top six’s strikers.

Raul Jimenez had the season of his life for Wolves last term. Nuno will be praying that he doesn’t face burnout after 50 plus matches leading the line for his side.

Consider too that Wolves don’t have European football this season. That’s a great option for the price.

Consider that only Jamie Vardy scored more goals last term. Consider too that Ings is the focal point for a Southampton side on the up and consider that he’s still just 28 and hitting peak. Ings is superb value for money at £8.5m - easily the best pound for pound striker on the game. He’ll be hugely in demand this time around.