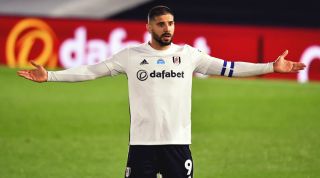 Forwards are the hardest part of FPL.

The first problem is that many former forwards are lining up in FPL midfields: Pierre-Emerick Aubameyang, Marcus Rashford, and Mason Greenwood are all midfielders this season.

The second is that pricing for the very top talent is luxury. What we've done is give you five players knowing you'll likely only pick one, but if you wanted you could pick three and build an £18m forward line.

As always game time and a regular starting berth are key criteria in addition to the perceived notion of putting points on the board!

The Red Card King is back in the Premier League - it's true, the Serbian forward is still discounted in the minds of many because of concerns he'll be suspended too often. While choke-slamming the opposition in one of the most-watched matches on the English football calendar likely doesn't help his rep, Mitrovic hasn't missed many games at any level over the past four seasons.

Oh, you wanted some insight into his attacking numbers? Last EPL campaign he banged in 11 with four assists. Last term he led the Championship with 26 goals. For £6.0m you can count on him to equal or surpass his 2018/19 total of 134 points, which is better per million value than both of Harry Kane's last two seasons.

Zaha to the left of me, Eze to the right. Here I am, stuck in the middle Ayew.

The younger of the Striking Ayews, Jordan finished last season with the 11th most fantasy points of any current FPL forward. That's not fair, he was actually level-11th. With Sergio Aguero.  That's impressive.

Even more impressive is he did it scoring only nine goals, and he did it for the team which was dead last in expected goals (34.45 xG) last year. If Crystal Palace hold onto Wilfred Zaha while adding Eberechi Eze to play the other side, the biggest beneficiary will be Ayew. The second biggest will be your fantasy score.

Mousset should be the first name on Chris Wilder's team sheet this season. A year ago the French forward was the third choice to lead the line, but was unquestionably the sharpest Blade in attack.

Let's talk fantasy numbers: a season ago Mousset recorded 0.71 xG+xA/90 minutes (that's expected goals plus expected assists per 90 minutes). That wasn't just good for 12th in the EPL (min. 500 minutes played) but was the same as Liverpool's Sadio Mane and Roberto Firmino, and City's David Silva. Get him in your side and hope Wilder's smart enough to do the same.

FantasyYIRMA started in 2012 focused primarily on news and previews for the Fantasy Premier League. Following consecutive fantasy coverage across 8 years and more than 300 gameweek’s, we are confident in saying we’ve wasted a large portion of our adult life on Fantasy Football.

Check out our podcast Bang Average on your listening platform of choice where Ryan, John and MikeP chat all things Fantasy Football related each week.

For additional insight covering FPL and draft fantasy emailed direct to your inbox, you can sign up for our free newsletter here.

Rodrigo Moreno is a better forward that Patrick Bamford and will have every opportunity to prove it this season. Marcelo Biesla is known for many things, but wasting money isn't one of them. While the ultimate end goal of this acquisition isn't yet known - Bielsa could well be signing him to helm the creative attack behind PatBam - there shouldn't be a question that the Spain international can, and will, deliver in the final third.

Leeds' early schedule is brutal so he may not be your first choice for GW1, but he's good enough to be sat on your bench against Liverpool and City, and even better to be starting vs . Fulham in GW2.

This is less a rousing endorsement of JayRod than a desperate need to identify a fifth player who might actually get regular minutes at this price point.

The Burnley forward scored eight goals and two assists in part-time duty last season, but never looked like a permanent fixture in Sean Dyche's team. His 15-goal campaign way back in 2013/14 has us all holding out hope he could hit double-figures, but the 31-year-old hasn't been able to solidify enough playing time to justify adding as anything other than a cost-saving. Rodriguez might not be worth owning GW1, but he is unquestionably a player to monitor this season.