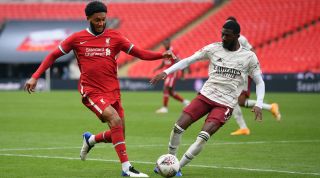 Andy Robertson (£7m) and Trent Alexander-Arnold (£7.5m) from Liverpool will once again be great FPL picks, but with the duo's price constantly increasing you really will have to hunt out the bargains to accommodate the likes of these premium picks.

As with recent fantasy campaigns: it’s slim pickings at this price bracket and you'll need to be brave, stupid or both to pick more than one or two of the names below... to preserve your budget, we've set the price at £5.0m but tried to focus on players at £4.5m.

Here we are again. If you'd prefer to stick with last season's Brighton discount there’s every chance that Lewis Dunk can do what we said he would last year (reminder: he scored 128 points for just £4.5m), but Lamptey is the new hotness. The 19-year-old already supplanted Martin Montoya, sending the former Barcelona man to Real Betis.

This is also a small wager on Brighton earning clean sheets which is largely dependent on the defensive value of Ben White, the centreback who stewarded Leeds to promotion while on loan and is being courted by Big Six clubs....so:

Actually, while you're here you should be considering Ben White! White he is largely clean sheet dependent, as Dunk was a year ago, White has potential. While doubling down on Gulls probably isn't the path to long-term success, picking one of them is a quality path to mid-term okayness.

KWP has secured his permanent move to Southampton and is expected to win the right-back spot to start the season. The English defender is simultaneously an exciting prospect for the future and a player who must perform now to stake his claim - for (£4.5m) it's worth the gamble on the later.

At age 23, Walker-Peters enters his fourth Premier League campaign having flashed fantasy brilliance in small doses. He pocketed two assists in 188 minutes back in 2017/18, adding another three helpers in 374 minutes the following year. This is the season he ties it together, giving you a helpful boost off the bench at a price you can live with.

Justin isn't the youngest player we're tipping to succeed, but he is the youngest who is being asked to lead a defence. Leicester City are in trouble. With Ben Chilwell sold to Chelsea and Ricardo Pereira still recovering from a serious injury, James was asked to deputise at right-back and held his own, but little more, while Brendan Rodgers side slipped out of the top four.

So why buy? He'll own the role until Pereira returns and this defence will get stronger with Caglar Soyuncu back in the fold. The two young defenders could be the core of Leicester's next great back four starting as early as GW1.

FantasyYIRMA started in 2012 focused primarily on news and previews for the Fantasy Premier League. Following consecutive fantasy coverage across 8 years and more than 300 gameweek’s, we are confident in saying we’ve wasted a large portion of our adult life on Fantasy Football.

Check out our podcast Bang Average on your listening platform of choice where Ryan, John and MikeP chat all things Fantasy Football related each week.

For additional insight covering FPL and draft fantasy emailed direct to your inbox, you can sign up for our free newsletter here.

The 23-year-old midfielder/defender/wing back/any other position you like player had been attracting interest this summer, but the Gunners could be wise to give him a bigger platform to grow this season. He didn't just take the iciest penalty in the Community Shield, AMN has shown he's versatile, capable and primed for a breakout.

Arsenal can't afford to lose any more special talent, and your FPL side can benefit. With the transfer window open for another month and rumours of a departure for the fashion mogul that is Mr. Hector Bellerin there could be plenty of game time this season for Maitland-Niles to build on appearances to date.

It's rare you're able to buy a starter in a top-six defence for £5.0m unless you count Arsenal...which this writer is not (OK - apart from maybe Maitland-Niles). At Chelsea, James has the right-back slot locked down for the next decade and he'll have plenty of opportunities to contribute to in Lampard's side this season.

For those chasing underlying stats to justify the addition, this Chelsea team finished the season second in expected goals and their defensive corps played a modest role in those returns. James and new teammate Chilwell will be on offer to support the attack down each flank and replicating Cesar Azpilicueta's annual contribution of six assists is well within James' grasp.