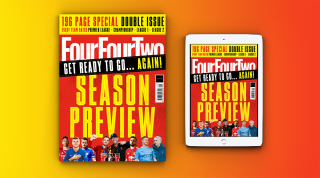 First a message from our editor, James Andrew

It’s almost like football has never been away – but for many, it can't return soon enough. Regardless, here we are with the start of a new season... so it’s time to start dreaming of what could be.

Of course, things will be different. For starters, we kick off a month later than normal and fans won’t be allowed into grounds for the early part. But some things never change, and as long as there’s a new season on the horizon, you can be sure that FFT will produce a bumper preview issue.

Flip the magazine over and you will be able to read our verdicts on each of the 92 Premier League and Football League teams, expertly reviewed and rated alongside previews for the WSL, La Liga, Serie A, Ligue 1 and Bundesliga. (For what to expect in the main magazine, meanwhile, read on.)

Good luck to all of your teams this season, and forgive my impartiality for a second: come on Fulham…

Expert analysis and FFT’s verdicts on every team in the Premier League, Championship, League One, League Two and WSL – plus summer previews for La Liga, Serie A, Ligue 1 and the Bundesliga. Don’t forget to tell us your own predictions on Twitter (@FourFourTwo) at #FFTPreview...

The Dutch great lets loose on his ill-fated spell as Manchester United boss, why Daniel Levy had to be smuggled out of his house by a neighbour, almost becoming Liverpool's director of football and much more...

Who can stop Liverpool?

The Reds are gunning for Man United’s record of 20 top-flight titles, and Jurgen Klopp is no stranger to back-to-back title glory. FFT asks Messrs Carragher, Rush, Evans and more how they’ll do it.

We chart the thrilling rises of Timo Werner and Hakim Ziyech, chatting to those who’ve been with them along the way. It’s time to get excited, Blues...

Replacing David Silva is no mean feat, but Pep Guardiola set his stall out long ago by declaring that big spending wasn’t necessary to get it done – not with a gifted local lad capable of taking the baton for good. Now, Manchester City’s 20-year-old icon tells FFT he’s ready to roll…

Having pinned our pre-season predictions to his wall, Wycombe’s Championship-bound manager – a prime contender for Nicest Man In Football – is happy to move on...

After 16 years outside the Premier League, the Whites are finally back. The heroes and villains of their gruelling comeback reveal all to FFT.

Coronavirus: what’s next for football?

Football League chairmen, chief executives and boffins on an uncertain future. Where do we go from here?

Going into the summer of 2000, he was unsure of his spot – and his Manchester United future. Nine months later, Teddy was a title winner, PFA and FWA player of the year. The man himself revisits his age-defying year, 20 years on.

The Championship Manager idol explains his depression battles and how a botched move to Liverpool changed his life forever.

Why we still love fanzines

In the Players Lounge…

Michael Vaughan waxes lyrical about his love for Sheffield Wednesday, Albert Ferrer discusses the merits of ferrets, Diego Forlan tells us about life in the dugout at Penarol, Rafa van der Vaart reveals the games that changed his life, and we explore why Ghana hasn't had a domestic champion for three years.

Subscribe to FourFourTwo today! Get your first 5 issues for just £5 and guarantee the finest football stories and interviews dropping on your doorstep first every month.