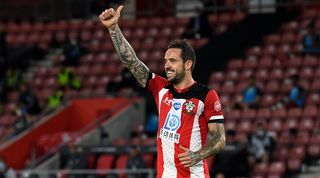 The Football Writers' Association awards one Premier League player with the Footballer of the Year title every season.

Usually, the award is announced in late April or early May, but this season's has, unsurprisingly, been delayed until this week.

With the dominance of those two teams on the Premier League, its unlikely anyone else will really get a look in. That's something borne out by previous winners: in the last 20 years, the Footballer of the Year gong has only once gone to a player for a club finishing outside the top six that season (Scott Parker, 2010/11, West Ham, 20th).

So here at FourFourTwo, we put our heads together and decided to draw up a shortlist of some players outside the top two who deserve some credit.

This has been Adama Traore’s Cinderella season: the year that he finally transformed from a rugby player on the wrong pitch to the hench prince of wing flair that we all dreamed he would be.

He’s been astounding. But it’s not just in the goals and assists, which are arriving with ever-increasing regularity. The Wolves wide-man is simply the most exciting footballer to watch in the league. He bristles with confidence and bustles past full-backs with ease; in an era of deep blocks and improved compactness, a playground player bucking trends is refreshing.

It’s hard to believe the same Aston Villa misfit is coveted by champions, now. Adama deserves it: he’s made football look fun this season - and we need that more than ever, right now.

FOOTBALLER OF THE YEAR

THE CASE FOR... Why Jordan Henderson fully deserves to be crowned Player of the Year

THE CASE FOR... Why Virgil van Dijk is the Premier League Player of the Year

THE CASE FOR... Why Kevin De Bruyne deserves the Footballer of the Year award

After three successive promotion-winning campaigns, Oliver Norwood must have thought he’d never get to the top table, let alone captain a club challenging for Europe. Johns Fleck and Lundstram have provided excitement, Dean Henderson has shone, but it’s hard to look beyond Sheffield United’s metronome as their Player of the Season.

Norwood is a midfield poet – a Burnley Beckham – who has excelled from set-pieces and been the chief chance creator of the unlikely lads. He’s played his first Premier League season with a grace that belies a life of lumping balls at 6ft frontmen in the depths of the Football League.

Frankly, it’s a wonder it’s taken this long for a Premier League side to take a chance on Norwood. He’s been wonderful to watch.

Age shouldn’t be a factor in this – the best player is simply the best player – but in the case of Jamie Vardy it seems essential to mention it. The 33-year old has enjoyed another sublime campaign for Leicester City, leading the line with the pace and tenacity of a player ten years his junior.

His 23 Premier League goals so far have fired the Foxes into Champions League contention, and surely bagged him this campaign’s golden boot. His tally was bolstered by a trademark purple patch between October and December in which he scored 11 times across eight consecutive league matches. He’ll become the oldest ever recipient of the top scorer gong, beating a 32-year old Didier Drogba’s achievement from 2009/10, and you wouldn’t bet against him doing it again next season. Like a fine wine.

Above all else, you want your goalkeeper to make saves – and nobody has done that more times this season than Newcastle United’s Martin Dubravka. The Slovakian’s 137 stops put him comfortably ahead of second-placed Tim Krul (128), and are a key reason behind the Toon’s solid and largely surprising mid-table finish this season.

Dubravka also ranks third in the charts in terms of expected goals saved. The 31-year old has been the difference between 11.3 more goals conceded, according to expert estimations. Expected Goals (xG) might not be for everyone, but there’s no denying Newcastle have had a considerable bargain on their hands since they snapped Dubravka up for a measly £3.5m in 2018. He’s been sensational again this campaign.

Manchester United are a different team with Bruno Fernandes. If you start count from the day the Portuguese midfielder signed, they top the form table. They haven’t lost a Premier League game in that period, and only Manchester City have scored more.

Obviously, the Footballer of the Year award can’t be given to someone who only joined the league at the fag-end of January, but his impact has been outstanding: seven goals and seven assists from 13 games so far.

His influence, though, can’t just be measured by these stats. United look different and, given the stretch of this run, there’s starting to be some rumblings that, well, the old United might just possibly be coming back. If that eventually happens, we’ll probably look back on this as the (half) season where Fernandes was Footballer of the Year, regardless of what the record books say.

If he plays at the weekend, not only will he have been an ever-present for Southampton this term, but he’ll have played as many games as he did total between 2015/16 and 2018/19.

It’s an incredible story. Two knee injuries – one to each knee – hampered his time at Liverpool, and could have ended his career. But here he is, second only to Jamie Vardy in the goalscoring charts, with over 20 goals for a bottom-half side. Now, still only 28, he has put himself in contention for the England squad at Euro 2021 next summer.

It would be a good season by anyone’s standards. For him, it’s ridiculous.