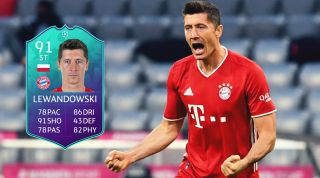 10 minutes on the clock, 200 names to guess - obviously some appear more than once.

NOW TRY Quiz! Can you name the players who broke these transfer records?

FIFA 21 REVIEW Have EA created a game better than football in the real world?

How well do you think you'd get on as a player or manager in the beautiful game itself?

With the likes of Football Manager and the FIFA franchise, we are lucky enough to simulate the idea of football, even if it's not quite the same. And though it may not be 100% realistic, it does provide a decent mirror to the real world. Even if Piemonte Calcio isn't a real club.

We've listed out for you the top 20 players in every FIFA game from 2012 right through to the current version - out to the world on Friday. All we want you to do is tell us who the top players were.

This is based on what their current ability was upon the game's release, not their potential ability, obviously.

FIFA 21 for XBox Series X pre-order: the new console is now available to buy – here's how you can play the latest FIFA on it

FIFA 21 for PS5 pre-order: the new console is now available to buy – here's how you can play the latest FIFA on it