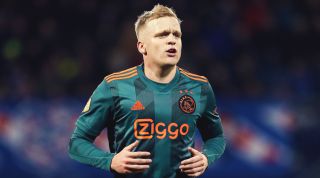 Seven minutes on the clock, 33 names to guess.

Ever since Sir Alex Ferguson cleared his desk in 2013, the arrivals lounge at Manchester airport has been a curious sight. World Cup winners, Hollywood playmakers, multi-million-pound defenders, even Fabian Delph - and that's just the players who signed for City.

We want you to cast your mind back, right back, across transfer windows past. Who do you remember holding up a red and black scarf talking of his "dream to play at Old Trafford"?

David Moyes was only able to bring in two of his own men – technically, his first arrival agreed to join before he did – but Louis van Gaal and Mourinho were both let loose with United’s millions before their downfalls. Now Ole's at the wheel and the cash continues to flow.