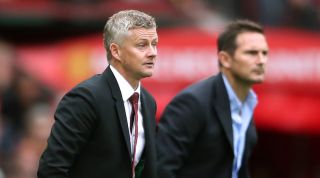 The FA Cup continues tonight, with Manchester United and Chelsea meeting in a replay of the 2018 final.

United are yet to get their hands on any silverware since Ole Gunnar Solskjaer replaced Jose Mourinho in December 2018, but are finally beginning to click following the signing of Bruno Fernandes and the return of Paul Pogba from injury. The FA Cup is the Red Devils' best shot at a trophy this campaign and you can bet they'll be taking this opportunity very seriously.

Chelsea meanwhile are in peril of not getting top four in the league. While it's been a good season - and one in which little was expected of a young side still in transition - the FA Cup offers a chance for Frank Lampard to prove his tenure is on the right track with a trophy.

Kick-off is at 6pm BST and the game is being shown on BBC One and BBC iPlayer in the UK. See below for watching details where you are.

If you’re abroad for the game, your domestic on-demand services won’t work because the broadcaster knows your location based on your IP address. Your access to the game will be automatically blocked, which is annoying if you’ve paid a subscription fee and don't want to resort to illegal streams which buffer every five seconds.

Don’t worry, though. All you need to do is get a Virtual Private Network (VPN) to circumvent such annoyances, assuming it complies with your broadcaster’s T&Cs, of course. A VPN creates a private connection between whatever device you’re using and the internet, meaning your suppliers’ service can’t work out where you are and what you’re doing. All the information passing back and forth is entirely encrypted.

How to watch an FA Cup live stream in the UK

The League Cup is broadcast on BBC and BT Sport.

How to watch an FA Cup live stream for US subscribers

If you want to watch the FA Cup in the US, you can tune into ESPN+. You can buy subscriptions to the service for $4.99 a month.

How to watch an FA Cup live stream for Canadian subscribers

The only place to watch the League Cup in Canada is on Sportsnet. Contact your television service provider in order to sign up for the service.

How to watch an FA Cup live stream for Australian subscribers

ESPN Australia has the broadcasting rights to the League Cup in Oz. ESPN is available to Foxtel clients. The Sports Pack costs $25 per month on top of the base $49 per month Foxtel Plus Pack.

Viewers in New Zealand can watch the FA Cup on Sky Sport. You can subscribe to the service for $9.99 per month.

How to watch an FA Cup live stream for Malaysian subscribers

Astro has the rights to the FA Cup in Malaysia.

How to watch an FA Cup live stream for Singaporean subscribers

You can watch matches live with Singtel's Sports Plus, with current non-contract deal from $49.90.