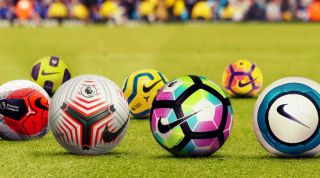 This week, the new Nike Flight ball was released to the masses, ready for the 2020/21 Premier League season, starting in September.

While most Premier League balls over the last few years have followed a gentle evolution, the Flight is a drastic upgrade. Eight years in the making and featuring prominent grooves along the sides, this is unswervingly the most impressive ball that the league has seen in its 28-year history.

YES, YOU WANT ONE Find out how to pick up a new Premier League ball here

Having enjoyed the new one so much, we decided to take a stroll back through every single football used in the Premier League since 1992. And we even had a little scope online for you, so you can get your own.

With so many iconic designs though, which one are you taking to the park?

It all began with the modest Mitre Pro Max. An old-school football with leather panels that soaked up an English field like a sponge.

The Pro Max is still iconic, let's face it. It paved the way for many modern matchballs, too.

The Pro Max is pretty rare to find online, but the Delta is a suitable substitute - buy it on Ebay here

Three years into the Premier League's existence, the Mitre Pro Max was replaced by the Mitre Ultimax. The 'V' patterns became a little more embellished, as the Prem established itself as the most exciting division in the world and stars from further afield came to play with our matchball.

With five years in service, this is still the longest-serving Premier League matchball in existence. It'll probably keep that record to itself, too.

The Ultimax is pretty rare to find online, but the Ultima is a suitable substitute - buy it on Ebay here

BEST FOOTBALLS TO BUY Nike, Adidas or Mitre? The top balls for training, matches – or playing in the park

Nike's first couple of offerings to the Premier League were classy and understated.

Boasted as "the roundest ball ever", the 'Geo' part of the name referred to the technology that allowed the bladder of the ball - that's the squishy bit in the middle - to fill out evenly against all sides of the leather when it was pumped up. Nike then followed this classic up with a greyer option, the 'Vapor', which aimed to reduce drag.

The Golden Boot winner with the first-ever Prem Nike ball was Chelsea's Jimmy-Floyd Hasselbaink. 992 goals were scored in that 2000-01 season - but it didn't make that much of a difference to Manchester United, who still stormed to a third Premier League title.

At Euro 2004, Adidas went for a silver offering with the Roteiro ball, and new designs were along for Nike too as the Total 90 brand developed; this was when national sides would have squad numbers in a ring on the front of their shirts.

The Total 90 Aerow ball that made it to the Premier League also had the ring around it, and for the first time, we got a separate yellow ball for the winter months. That ring pattern had a function though, other than looking cool - it allowed players to see the spin on a shot.

This ball is a classic.

Then came the Total 90 Aerow II ball. Building on the technology of the last ball, this one altered the design a little for an asymmetrical pattern, as Nike realised that such a unique design would be even easier to see flying through the air.

Arsenal's Cesc Fabregas completed 2,100 passes the first season that this beautiful ball was in service. Nike switched it up with a red one for the next Prem campaign.

With six-layer casing and Nike's greatest accuracy with a ball yet, the Omni was in use for Manchester United's renaissance in the Premier League. This was also the first time that the Nike Swoosh logo had been embedded in the graphic itself.

Cristiano Ronaldo loved this thing, with 57 shots on target with it in its first Premier League campaign. The arched panels were a good look and apparently made for even distribution across the sphere.

With HD TV now much bigger than before and technology in football getting even better, this is where we see a much more detailed, futuristic matchball than ever before.

The Ascent featured a micro-texture and 'RaDaR' visual technology. The pattern was developed from the previous models but this was a much busier design that we'd ever seen before. The 2000s were a maximalist decade for design anyway; it's fitting that Nike went overboard before scaling things back for a new era.

It's perhaps a surprise that it took a decade for Nike to introduce their trademark Volt green shade into the Premier League ball - but the Tracer is an absolutely beauty, nonetheless.

With all the same tech that the Ascent brought to the ball, this Tracer stripped back the design for a timeless look. For many, this was the Berba ball, as Dimitar Berbatov rolled back the years to fire United to another title. Chelsea's Michael Essien actually passed this thing more than anyone else, though.

The Aguerooooo ball from when Manchester City first lifted the Premier League title, Nike went more vibrant and created a pattern that reflected the Prem logo itself.

This particular ball was upgraded to nine layers of casing, as Robin van Persie snatched the Golden Boot. It's a lovely design.

The Maxim went up to ten layers of casing and integrated 'fractualated' glass layers a unique visual appearance.

Despite the tech, however, this was always one of the less futuristic-looking matchballs. The simple design was a big hit; not for the goalkeepers who had to save 73 of Gareth Bales shots, though.

This was Luis Suarez's ball: the season that Nike brought in a purple/orange colour scheme just to mix things up a bit coincided with Liverpool's near-miss at the title.

The new colour palette actually opened the doors to Nike bringing in wilder designs than ever before. This was the ball that Asmir Begovic scored with for Stoke City, by the way.

This is a big change in the ball world. No, the design doesn't look all that different. But the fluorescent lines around the ball are key: they indicate the grooves of this ball. This was the first to feature such grooves, with the ball being welded along some of them.

Yes - welded. This was a first in football and with synthetic leather casing, this genuinely felt space-age when it first hit the back of the net. Sergio Aguero was the first to win a Golden Boot with a welded ball.

The following season, Nike built upon the Ordem technology, bringing even more attention to it with a black webbing all along the grooves. The ball was as much white as it was red - which felt pretty new, too - though Nike opted for traditional hexagonal and pentagonal patch patterns, similarly to Adida's classic 1970s Telstar design.

Perhaps this ball should've been blue rather than red - it's forever associated with Leicester City.

The rainbow ball had so much more technology that went into it aside from just pretty colours. This was the season that the Premier League rebranded its logo, so it needed a modern ball to match.

The Ordem 4 used 3D ink to create a touch texture, which allegedly provided some kind of grip. Nike called this pattern "Flow Motion", but opted for just red on the yellow winter ball.

Once more, Nike stripped it back for a simpler ball, as the Prem brought in a simpler typeface for the names and numbers on players' shirts. This particular Ordem ball kept the dark "Cage" pattern of the last one, but went with fluorescent flickers.

Nike-sponsored Man City won their first title under Guardiola - which must have had useful marketing results - though we're still no clearer as to why they switched the numbering to Roman numerals five versions in.

Buy this ball on Amazon

In the end, a good idea is a good idea forever. Nike certainly thought so when they took inspiration from their original Merlin design to reshape that "cage" around the ball, with the equaliser-style pattern that they were putting on every club's sleeves that season.

Nike integrated All Conditions Control (ACC) technology in a ball for the first time with this one, ensuring optimal control in all weather conditions. They also reduced the number of welded panels from 12 to four. Mohamed Salah, Sadio Mane and Pierre-Emerick Aubameyang all shared the Golden Boot on this one.

Buy this ball on Amazon

Since Nike's partnership with La Liga to produce their matchballs ended at the start of this campaign, the 2019/20 Nike Merlin football became the first version produced solely for the Premier League. To mark 20 years of producing balls for the Prem, it became a little more personalised.

The winter ball was designed to hark back to the mid-2000s Total 90 Aerow balls, while the ball in circulation for the first third of the season is said to have "featuring pearlised ink inspired by the reflection that comes off the Premier League trophy".

The post-February 'Tunnel Vision' ball - the Corona ball, let's face it - twisted the design a little more, with bigger orange spots and an edited Nike Swoosh.

A lot of thought has gone into the new Nike ball. There are iridescent graphics featuring technical details of the ball, taking influence from "in-flight instrumentation", hence the name. The "Angular Chevrons" are a reference to the Prem being the fastest league in Europe.

Those grooves are bigger than ever, and they disrupt airflow across the ball for less drag and more stable flight. 30% truer flight, in fact, than the last ball. We've come a long since the early 90s...

Buy this ball on Nike.com