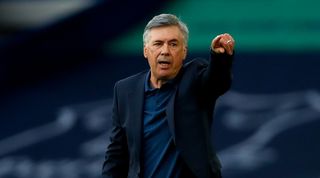 James Rodriguez appeared over the Albert Dock, a big screen showing Everton’s new signing. A skyscraper in Bogota went blue, displaying 19, the number Colombia’s only Golden Boot winner will wear at Goodison Park. There was talk of the newcomer’s 46 million Instagram followers and how his profile propels Merseyside’s second force into a new dimension.

Carlo Ancelotti’s flagship recruit is Everton’s most exciting buy since… well, who? Wayne Rooney, perhaps, but the homecoming hero was in decline when he returned in 2017, just as Paul Gascoigne and David Ginola were nearing their respective ends. And while Rodriguez’s fortunes have faded since the heady days of 2014, he is only 29. Perhaps you have to retreat further into Everton’s past to find others defined by World Cups, but Gary Lineker had only scored three international goals when he joined in 1985. So Alan Ball, bought after his display of relentless running in extra time helped England secure victory in the 1966 final, may bear comparison.

And yet a near-namesake, rather than Rodriguez, may be Everton’s most significant signing this summer. Allan answers Everton’s most pressing need; indeed, a need that can involve pressing. At the risk of simplifying matters, Ancelotti’s first few months at Goodison Park lent itself to very different interpretations according to the section of the team. In goal, Jordan Pickford was erratic. But the back four showed defiance, with each of Lucas Digne, Michael Keane, Mason Holgate and Seamus Coleman having fine spells of form. In attack, Richarlison and Dominic Calvert-Lewin scored at impressive rates, despite the Englishman’s summer drought.

PREMIER LEAGUE PREVIEW Which Everton will actually turn up?

But the midfield was often awful. They provided too few goals and assists, too little creativity or class in possession, too little bite or battling qualities. Everton’s worst performances – the 4-0 thrashing at Chelsea, the 3-0 vanquishing by Wolves – stemmed from the nothingness at the heart of the team that meant they could be overrun. Ancelotti’s plan to play 4-4-2 was undone by the reality that no pair of central midfielders sufficed. Gylfi Sigurdsson, Andre Gomes and Tom Davies all wanted to play with a more defensive presence and each was miscast as the holding man. Davies regressed, Gomes did not recapture his past form on his recovery from injury and Sigurdsson was simply wretched, a No. 10 who struggled as anything else. Fabian Delph was often injured, Jean-Phillipe Gbamin seen so rarely it is a moot point if he even exists.

Enter Allan. “One of the best defensive midfielders in the world,” according to Ancelotti, could be a low-risk, high-octane arrival. Allan averaged the third-most tackles per game in Serie A in 2018-19 for Napoli: Ancelotti’s Napoli. He could cover enough ground to allow Ancelotti to only require two central midfielders. His pass completion rate of 88.6 percent in the Italian’s sole full year in charge meant he was supplying more creative players with accuracy; indeed, his 85 shot-creating actions then was more than any Evertonian except Digne mustered last year. Over eight seasons in Italy, he averaged 33 league appearances, offering an immediate contrast with Everton’s injury-prone midfield.

Perhaps Gomes and Allan will be Ancelotti’s new silk-and-steel partnership, a modern-day Andrea Pirlo and Gennaro Gattuso. Or maybe Everton will settle for a double injection of power and ally Allan with Abdoulaye Doucoure, assuming the latter joins.

Whichever, it is apparent that Ancelotti’s inherent amiability did not blind him to the problems at Everton last season. A manager who had spent two decades coaching elite players was accustomed to some of the finest midfields and midfielders in Europe; from Angel Di Maria, Sami Khedira and Luka Modric at Real Madrid to Xabi Alonso, Arturo Vidal and Thiago Alcantara at Bayern Munich. At Everton he found a wasteland.

Ancelotti recognised the issue and addressed it. The words he used to describe Allan’s game – strength, aggression, energy – highlighted what Everton were lacking. “He can make the others better,” Ancelotti said. His defence should welcome Allan. And so should Rodriguez, if the selfless worker gives Everton’s brightest star a platform to play.