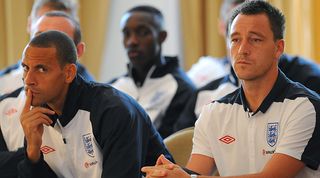 “Before I left his [Manchester] City farewell party, I stuck my hand out to him and said: ‘Good luck Rod,’” explained former Manchester City star Dennis Tueart. “Fuck off,” came the terse reply. The feud between the England internationals at Maine Road had simmered for years.

Tueart told City boss Tony Book that Marsh was a “show pony” and “self-indulgent”. Marsh countered that Tueart was “miserable and two-faced”. The pair, who subsequently plied their trade in the USA, never patched things up – although Marsh tried to inject some humour into proceedings, telling Tueart: “You’re a bastard, but I can’t remember why anymore,” when they bumped into one another at a party decades later.

According to Bobby’s autobiography My Manchester United Years, the Red Devils legend fell out with his own opinionated brother – and former Leeds United star – over Bobby’s wife, Norma. Bobby’s mother Cissie never warmed to her son’s spouse, and Jack took his mum’s side in the Charlton family feud which rumbled on for decades.

World Cup winners Bobby and Jack have resolved their differences in recent years. Sort of.

“When he (Jack) is in the Manchester area, he pops into our house and sometimes it's easy. Sometimes less so,” Bobby explained.

"I thought he might say: 'Good luck Coley' or something like that and shake my hand, but instead Sheringham snubbed me," recalled Andy Cole of the time he prepared to make his England debut against Uruguay in 1995. “From that moment, he was nothing to me. I couldn’t be bothered.”

When Sheringham (then playing for Tottenham) moved to Old Trafford in the summer of ‘97, a still-furious Cole point-blank refused to talk to him. "I never spoke a word to him," claimed the scorned Cole. Despite the ongoing tension, it didn't stop them scoring hatfuls of goals together, averaging almost one per game.

Le Saux, the Jersey-born defender, and Batty, the ultra combative Yorkshire midfielder, had been sparking for weeks at ailing Blackburn Rovers. As Le Saux explained: “I never took kindly to how David criticised me on the pitch.”

Four minutes into Rovers’ Champions League clash at Spartak Moscow in November 1995, the pair collided. In the midst of the angry war of words that followed, Le Saux broke his hand as he punched Batty. Rovers crashed out of Europe, but both cleared the air in the airport lounge before they flew home.

“I liked Don Revie. He got us more money for playing for England,” explained ex-QPR maverick star Stan Bowles. “But when Don told us that our appearance money was going up to £250 per game, Emlyn Hughes got up and squeaked about how he wasn’t interested in the cash – only the glory of playing for his country.”

Bowles later accused the Liverpool defender – and resident Question Of Sport captain – of being a “pipsqueak”, with Hughes countering that Bowles was “just a fancy Dan”.

“I told Emlyn I’d have his appearance money if he didn’t want it,” Bowles recalled. “Emlyn just shook his head at me in an annoying holier-than-thou way.”

"England did nothing in that World Cup, so why were they bringing books out? 'We got beat in the quarter-finals. I played like shit. Here's my book'," was feisty Newcastle United midfielder Joey Barton’s unequivocal view of international stars Frank Lampard, Steven Gerrard and Ashley Cole opting to publish autobiographies in the wake of England’s disappointing 2006 World Cup in Germany.

Barton also suggested (not inaccurately) that Gerrard and Lampard couldn’t gel in midfield for their country in a friendly against Spain.

When Barton was called up for England in 2007, Gerrard tried to defuse the situation with humour, and a copy of his autobiography was left outside Barton's hotel room. "I've signed it for him," said Gerrard. "You get a lot of time to yourself and I thought he might like to read it." Barton had little time to gel with his new midfield team-mates – that was his solitary cap.

In defence of Michael Owen: the ex-footballer who just wants to be honest

“I've never actually spoken to John about the case. I no longer talk to him," Ferdinand added, before admitting that his and Ashley Cole’s friendship was also finished. “For me it ended the day he decided to go to court in support of John Terry,” explained the ex-Manchester United defender.

“There had been some pent-up anger down the years between Norman and me,” recalled Derby County forward Francis Lee, “and on that day, it just exploded.”

The England man, who played in the 1970 World Cup, was referring to his infamous brawl with Leeds hardman Norman ‘Bites Yer Legs’ Hunter in November 1975. Leeds players were incensed by the way Lee had tumbled over a barely outstretched leg to win a penalty for his team, and Hunter later admitted that his former England team-mate was regarded by the Leeds team as “someone who went looking for spot-kicks”.

Following a tussle between the pair, a vicious right hook from Hunter knocked Lee to his knees, splitting his lip in the process. As both men made their way to the touchline having been dismissed, Lee threw a flurry of punches at Hunter and complete mayhem ensued between the two sides.

Derby won 3-2 at the Baseball Ground, and although Lee insisted that “Norman and I patched it up very quickly”, the old warriors raised their fists and yelled “come on then” when they met at games afterwards. Purely in jest, of course…

QUIZ Can you name Michael Owen's 50 most frequent England team-mates?

GUIDE Premier League live stream 2019/20: how to watch every game from anywhere in the world