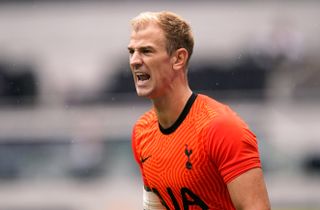 Debut day turned sour for two of Tottenham’s newcomers. Matt Doherty was left trailing in the relentless Richarlison’s wake on Sunday. Pierre-Emile Hojbjerg suffered by comparison with the Everton midfield he could have been a part of.

But there is a third arrival, and perhaps his bow will come not against the triple Champions League winner Carlo Ancelotti, but against officially the fifth-best team in Bulgaria, Lokomotiv Plovdiv, in the Europa League on Thursday.

Tottenham’s move for Joe Hart may have been prompted by the sense Hugo Lloris is getting more injury prone, a lack of confidence in Paulo Gazzaniga or a need to increase their homegrown contingent to render it easier to fit foreigners into 25-man squads.

But there could be another factor. Only one letter separates Joe from Jose. Perhaps Jose Mourinho sees himself in his new goalkeeper. Perhaps if Mourinho was a footballer, he would be Hart.

ALL OR NOTHING Watch the Tottenham documentary on Amazon Prime

Consider the evidence. Each graduated to the top of his profession at a young age. Mourinho was a Uefa Cup winner at 40, a Champions League winner at 41 and a Premier League champion at 42. Hart became Manchester City and England’s first-choice goalkeeper at 23, an FA Cup winner at 24 and a Premier League champion at 25. Each was defined by the Champions League: Mourinho returning Porto and Inter to the European summit after long waits, Hart as City’s outstanding player in their first five years in the competition, often reserving his finest displays for continental opponents.

Now each seems in premature decline. Mourinho’s last genuinely outstanding achievement came in his forties, winning La Liga with Real Madrid in 2012. Hart’s last notable feat came in his twenties, his penalty save from Zlatan Ibrahimovic a major reason why City reached what remains their sole Champions League semi-final. Some managers peak in their fifties and some goalkeepers in their thirties. Not them.

Each feels trapped on the wrong side of history. They lost battles and arguments with Pep Guardiola. Mourinho’s brand of football was superseded by the Catalan’s. He became an anachronism as first passing and then pressing became dominant theories.

Hart’s style of goalkeeping looks outdated. Alisson and Ederson are part of the new breed, bringing the distribution of outfield players to a job where many used to just thump it long. Hart, a promising cricketer in his youth, is the equivalent of a Test-match opening batsman in a world when everyone else is playing Twenty20.

Hart and Mourinho remain wedded to methods that once served them well, even if the evidence is that they are no longer are good at implementing them as they were. Mourinho’s teams used to be unbeatable at home, defensively outstanding and mentally tough; recent years suggest they no longer are. Hart has not addressed his weakness against long-range shots.

Perhaps each is incapable of change. Obstinacy may have helped each at times on his rise, but it has rendered them divisive. They can be unsympathetic figures and are accused of arrogance, though each has many a loyalist among those who have shared dressing rooms with them. Certainly some of Hart’s vocal attempts to put opponents off could echo Mourinho’s mind games, even if they have tended to be less successful.

He has fallen further and faster. He has not played in the Premier League since 2018, when he conceded 41 goals in 19 games for Burnley. He made three appearances last season: in the first of them, he conceded three times to League One Sunderland and his sole save led to one of their goals. He has made six saves in 21 months.

But if his comeback is in the backwater of Bulgaria, Mourinho has a vested interest in Hart flourishing. More than virtually anyone else, Hart is the personification of Mourinho on the pitch.

While you’re here, why not subscribe to the mag - and get every issue for less than £3.80 delivered to your door!