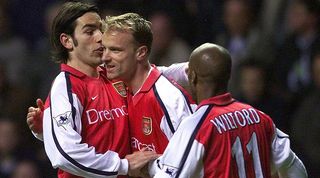 Dennis Bergkamp has set the record straight to FourFourTwo about his famous pirouette goal at Newcastle – clearing up 18 years of debate.

To mark 25 years since he joined Arsenal, Bergkamp gives an in-depth interview about his career in football in the August 2020 issue of FFT - out in shops this week and available to order online with free delivery.

SUMMER SALE Just £9.99 for the first six months with a FourFourTwo subscription

One of his most famous goals during his time as a Gunner was the one he scored against Newcastle at St James’ Park en route to the 2001-02 Premier League title.

Collecting the ball with his back to goal, Bergkamp brilliantly flicked it around one side of Nikos Dabizas, pirouetted past the defender on the other, then coolly fired into the net. In one poll, it was later voted as the Premier League’s best ever goal – but debate has raged ever since about whether the Dutchman meant to score in the way he did.

“The week after that goal, ‘Did you really mean it?’ was the question everyone was asking me,” Bergkamp told FFT.

“I couldn’t understand what people meant by the question. I didn’t see the goal on television for several days, and so many people were asking me that I thought, ‘OK, I have to see what they saw’.

“I watched it back, and then I could understand what they meant.

"The pass from Pires was slightly behind me and I was adjusting myself to the situation, because I wanted to go through on goal with one touch. I touched the ball, but my body was already turning the other way, so it looked quite good!

“For many goals, players just decide at the last moment what they’re going to do. That was the same with me. I’m glad it looked like that, and that everyone is still talking about it today.”

GUIDE Premier League live streams: How to watch every game on this week

Read the full exclusive with Dennis Bergkamp in the August 2020 issue of FourFourTwo. We also remember more era-defining icons, ask Djibril Cisse your questions about a colourful career, hear Nile Ranger's startling confessions, remember when Celtic halted Ranger’s charge for 10 in a row, chat to Bayern’s Joshua Kimmich, mourn Atalanta’s season of muted celebrations and much more. Grab your copy in shops or online!