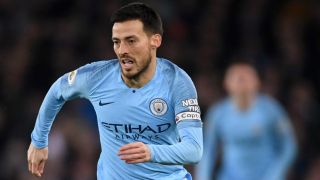 Today, tomorrow, and probably for a very long time, there’ll be a discussion about David Silva. Not an argument exactly, but a gentle friction between those who claim him as the very best player in Manchester City’s history and others who, in response, ask to see the working for that sum – the tangible proof.

Who’s right and who’s wrong isn’t really important. What matters more is that for the duration of his time in the Premier League – 10 years now – Silva has been the embodiment of a very specific tension in the game. There are those who measure a career’s significance in a very literal way and others who employ a more subliminal method. For better and for worse, Silva has been at the centre of their conflict.

Does he belong at the head of a Manchester City list which includes Yaya Toure and Sergio Aguero? Both were often influential in a more literal way and, in the context of their respective positions, were unique in both their style and their success.

But did their impact depend on him? Not through his assists and final balls, but in the rhythm he provided and the quiet stress he was able to exert on a defence.

It’s the typical creator’s conundrum and, actually, that’s one of the problems. Silva wasn’t unique. Rather, he was a type – a classic, an ideal. From his height to this haircut to his impish face, he was the silhouette of the playmaker and a type of footballer recognisable from generations past. He was refined, retouched and remastered, certainly, but not an outright reinvention of anything that had come before.

Not like Kevin De Bruyne, that thrilling hybrid of all the attacking midfield positions. Or even any number of modern full-backs, who have changed the demands placed on the position. No, Silva is nothing that hasn’t been seen before. It just so happens that what he does really well will never become less important.

Nevertheless, it places him in opposition to the more readily accepted notion of greatness. What’s clear – and this is true in many fields beyond sport – is that the world is perpetually in thrall to originality. It is those who break barriers and challenge orthodoxies who are afforded the unimpeachable legacies.

Lionel Messi, Cristiano Ronaldo, Diego Maradona, Pele; what connects those four players – or any others who belong in their company – is not just collective admiration for their ability, but a recognition that they redefined something about the game.

Think of it that in a simpler way – in athletic terms, perhaps. The celebrated 100m runners of any generation are those who break the world record. In other words, it is those who produce something previously unseen. A spectacle, but also a moment of evolution which redraws a boundary and facilitates further progress.

By contrast, the smooth mechanics and perfect stride of the runner who just consistently breaks 10 seconds isn’t anything like as interesting. Maybe Usain Bolt isn’t the prettiest runner of his era, but he’s the quickest and that’s what counts.

Football isn’t so simple, but that same principle holds largely true. It is the unusual players that endure. Messi and Ronaldo for their goals, Zlatan Ibrahimovic for his combination of size and skill. So on and so forth.

Silva doesn’t quite belong in that conversation; he’s never held that kind of status. The other problem though – the reason why his worth remains ambiguous – is because his career hasn’t been punctuated by moments. Highlights, signatures; he doesn’t really have them.

When someone mentions his name, it doesn’t conjure a dominant image. Nor is there a single pass or goal which appears to neatly comprise his value. Instead, a sequence plays which doesn’t belong to any particular game or feature any opposition. It’s just him, alone, turning beautifully, twisting through the shadows of an empty stadium.

So, Aguero has QPR, Toure has Aston Villa, Newcastle and Crystal Palace, and even Vincent Kompany has Manchester United and Leicester City. David Silva has a quieter body of work, though, and the memory of what he was will have to be sustained by those tight roulettes alone.

FIFA 21 Everything we know so far