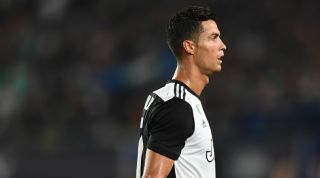 Cristiano Ronaldo has spoken publicly to Piers Morgan about his reaction to the allegations of rape against him over the last decade, for an ITV show being broadcast on Tuesday night (9pm BST).

Here's what we know about the story...

One of the greatest footballers to have ever played the
beautiful game gives his most revealing interview yet.
Cristiano Ronaldo Meets Piers Morgan
Tonight 9pm @ITV#RonaldoMeetsPiers@Cristiano@piersmorganpic.twitter.com/poXxQBxtV3— ITV (@ITV) September 17, 2019

Why was Cristiano Ronaldo accused of rape?

On Friday June 12, 2009, Cristiano Ronaldo met Kathryn Mayorga in a nightclub of Palms Casino resort in Las Vegas. They went back to Ronaldo’s penthouse in Hotel Palms Place, and it is there that Mayorga claims Ronaldo raped her. Ronaldo says they had consensual sex.

He was a Manchester United player at the time, but was on the verge of signing for Real Madrid.

How did the story come out?

In April 2017, German newspaper Der Spiegelrevealed both the allegation of rape against Ronaldo by Mayorga – then anonymous – as well as the existence of an out-of-court settlement between the two parties. This non-disclosure agreement, dating from 2010, was a payment of $375,000 to Mayorga, providing she did not go public with the allegation.

This report came as part of Der Spiegel’s work with Football Leaks, which since 2015 has revealed thousands of documents relating to football – detailing previously secret deals and transactions, many of which relate to reducing tax payments from players and agents.

Ronaldo’s representatives initially claimed that the story was a "journalistic fiction" based "on documents which are unsigned and where the parties are not identified". The paper later published the signed documents, as well as leaked text messages between Ronaldo and his lawyer.

Who is Kathryn Mayorga?

Mayorga decided to go public with her identity in September 2018, saying she had been inspired by the Me Too movement.

She initially reported a rape to Las Vegas Police Department on June 13, 2009 – the day after she had met Ronaldo in the nightclub and the alleged incident took place. She was visited by police, and underwent an examination in hospital that noted swelling, bruising and laceration on her body. She received antibiotics.

However, she did not disclose Ronaldo’s identity to police at the time, and they closed the case. It was not reopened until 2018.

What has Ronaldo previously said about the allegations?

Ronaldo has always denied the allegations, arguing that the two had consensual sex. When Der Spiegel first reported the story in 2017, his lawyer responded to journalists with a statement saying: “We categorically reject the accusations raised in your questions.”

Back in 2009, with lawyers becoming involved in the case, a questionnaire was submitted by Ronaldo's own legal representatives to the player, asking him to detail events of the night in question. Several versions of the questionnaire, also leaked, exist. In an early version, it appears that Ronaldo – who is named only as ‘X’ in the document - explains: "She said no and stop several times." Further to that, it states: "But she kept saying 'No.' 'Don't do it.' 'I'm not like the others.' I apologised afterwards."

It details that: "I entered her from behind. It was rude. We didn't change position. 5/7 minutes. She said that she didn't want to, but she made herself available." And also recollects that: "She didn't complain about it being brutal. She complained that I forced her. She didn't say anything about wanting to go to the police."

Is the case against him ongoing?

No. In July 2019, the relevant US authorities announced they had decided not to press ahead with prosecution against Ronaldo. A statement from Las Vegas prosecutors said: "Based upon a review of information at this time, the allegations of sexual assault against Cristiano Ronaldo cannot be proven beyond a reasonable doubt.”

However, a civil case against Ronaldo is ongoing. Civil suits have a lower burden of evidence needed to be successful – operating roughly on ‘more probable than not’ lines rather than ‘beyond reasonable doubt’.

The civil suit aims to overturn the initial settlement, which Mayorga’s lawyers claims to be void, and seek further damages. As part of the case, Ronaldo’s lawyers have submitted a motion accepting the existence of the 2010 settlement for the first time.

Was Ronaldo found guilty or innocent?

As no criminal case ever came to a conclusion, he has never been found either guilty or acquitted of any allegations.

QUIZ Can you name all 36 teams to have beaten Pep Guardiola as manager?

GUIDE Champions League live stream best VPN: how to watch every game from anywhere in the world