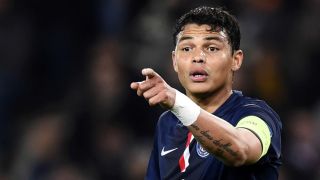 There was a time when references to Chelsea Pensioners were not confined to retired soldiers or a hospital. Go back a couple of decades and Stamford Bridge provided a home to a series of ageing imports. For Ruud Gullit and Gianluca Vialli, a stint in London was the postscript to playing careers, each showing his enduring class, and the start of managerial careers that delivered early success.

In one respect, Thiago Silva will be their spiritual successor if he joins Chelsea; not that he is likely to replace Frank Lampard in the dugout but, approaching 36, he is a throwback to a different era of signings.

The simplistic interpretation is to call him the antithesis of Lampard’s ethos: old and foreign, rather than young and English, he is everything Mason Mount is not. He has spells at AC Milan and Paris Saint-Germain on his CV, but none at Derby County. Still, after David Luiz and Willian took their leave in successive summers, there was a vacancy for a thirty-something Brazilian that Silva should fill.

EUROPEAN CHAMPIONS Bayern Munich's near-perfect year: How the treble-winning side did it

The financial implication of a free transfer, albeit one with hefty wages, is it makes Ben Chilwell and Kai Havertz more affordable. On the pitch, the success of Lampard’s rare foray into short-termism will be assessed if Silva brings about a reduction in the goals conceded from a steepling 54 last season to something more respectable and if he manages to form a dependable partnership with Antonio Rudiger, Andreas Christensen, Kurt Zouma or Fikayo Tomori, something no two of the existing quartet managed.

There is an Anglocentric tendency to judge players on the basis of their performance in the Premier League. In Silva’s case, it should be ignored. His legacy should be secure, regardless of what happens at Chelsea. He will remain one of the great centre-backs of his generation, albeit with the twin caveats that he never won the World Cup and the Champions League when he could have claimed both.

GET 'THIAGO' ON THE BACK? Buy Chelsea's new home shirt now

But there is a bigger, broader issue. The Premier League has become the most multinational and multicultural in the world, but it is increasingly unforgiving to some of the luminaries who arrive at an advanced age. Those who are not accustomed to its pace can struggle when their own legs are going. The direction of travel now is for slowing players to decamp elsewhere for a less intense brand of football. Leave France for England and Silva will feel like Cesc Fabregas in reverse.

Some of the precedents are worrying. Stephan Lichtsteiner and Bastian Schweinsteiger represent cautionary tales of players who lacked the power the Premier League requires. Had either arrived at or near his peak, it is very probable he would have flourished. Had Schweinsteiger been of a different generation and come in decline but in the 1990s, his quality might have compensated for his lack of physicality. Not in the 2010s. Now, propelled by the gegenpressers, the league feels still faster.

There are arguably only two success stories in the last decade among distinguished players who first came to the Premier League at an age when others were hanging up their boots: Esteban Cambiasso and Zlatan Ibrahimovic. If Silva’s former PSG team-mate looks a role model, one who imposed himself on a new league, his former manager offers a warning. Laurent Blanc was also defined in part by a World Cup semi-final, though for different reasons, but joining Manchester United at 35 felt a move too far. If Silva’s primary task will be to shore up Chelsea’s shaky defence, he could also do a service for footballing pensioners everywhere by showing England isn’t no country for old men.