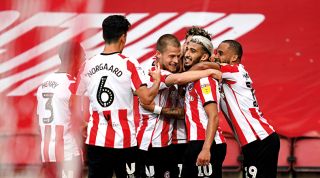 How will the Championship table look at the end of the 2020/21 season? It's an unpredictable league at the best of times, so pity the poor FourFourTwo souls who put this together...

With a pandemic exacerbating overstretched finances, few Championship promotion races could end up being more important than this one.

England’s second tier has been variously described as “a bubble waiting to burst” and “a runaway train ready to hit the buffers” recently, after its 24 clubs lost a combined £300m in 2018/19, with an average wages-to-turnover ratio of 107 per cent. And that was before coronavirus arrived. With huge chunks of income already lost and such problems far from over, some need the Premier League gold more than ever.

But which three clubs will grab those riches? Our Season Preview issue is on sale in shops and online now, and we got together with the Not The Top 20 Podcast to have a stab at the Championship...

Looking for another league? Find our Premier League predictions here, with League One, League Two and the Women's Super League coming out over the coming days.

If the Championship’s past five years have taught us anything, it’s that play-off heartbreak isn’t the end. Brentford will lose stars but retain others and find new ones. Provided they can reassert dominance in a new stadium, it will finally be their year... right?

Losing every week is a hard habit to break, but Norwich moved quickly for Kieran Dowell – who is very experienced at this level for a 22-year-old – and some typically off-piste Stuart Webber signings, such as Danel Sinani from Luxembourg’s Dudelange.

Watford are tough to predict: the first task for head coach Vladimir Ivic, landing in the Hornets’ nest following success in Israel, is to assess a gigantic squad. But the club consistently buy well, have Ben Wilmot returning and are in a weak-looking league this year.

Though Derby’s attacking output will need to improve, the themes last term being a low shot count and a high number of shots from distance, they’re in decent shape. Wayne Rooney is there from the off and a clutch of exciting young starlets are ready for a big year.

How do you respond to throwing away a play-off place you’d held all season? Sabri Lamouchi must revive a talented squad and build a cohesive attacking unit less reliant on some Joe Lolley magic – no other team took more shots from outside the box than inside.

Getting underway with a settled side, a defined style and a coach in tune with his players gives Cardiff a headstart. Averaging the least possession in the league but the most set-piece goals, it won’t always be pretty... but it will be pretty effective.

Late goals, and failing to score them, killed Preston when they looked deserving of a play-off place. They have a top manager and good players nearing their peak; if they could only find a regular source of goals, they’d be real promotion contenders.

Can Millwall crack the top six? An excellent goalkeeper, solid spine and bona fide match-winner in Jed Wallace, all led by a manager who suits the club, suggests they can. But Wallace needs help and Troy Parrott is only 18, so they’ll need to ride tight margins again.

On points per game, a complete campaign under O’Neill would have put Stoke into last season’s play-offs. There’s good reason for belief, if he can coax consistency out of Nick Powell and continue to help the development of talented tyro Tyrese Campbell.

On one hand, Steve Cooper has adapted quickly to club football, shown his excellent contacts and worked tight margins to his side’s advantage. On the other, they’ve lost almost the entirety of their impressive 2019-20 spine. Will new loan stars light up Swansea?

This is a new-look Bournemouth: not just Eddie Howe gone, but half a dozen players with more than 1,200 Cherries appearances between them. They have good defenders for this level and a bit of money to spend; they’ve not always spent it well of late, mind.

Blackburn’s steady progress under Tony Mowbray may begin to slow a little, unless the Adam Armstrong of 2019-20 can continue his hot streak in front of goal alongside a fit-again Bradley Dack. Still, there’s more reason to hope than to worry.

Last season’s relegation battle is unlikely to be repeated, now that square pegs are in square holes and their young English contingent has an added year of experience. Aynsley Pears, Boro’s 22-year-old goalkeeper, is one to watch this campaign.

Even allowing for misfortune and mishaps, letting in 76 goals isn’t a good look – and now QPR’s defence has a Grant Hall-shaped hole in it. Mark Warburton likes a challenge; losing Hall, Ebere Eze and possibly Bright Osayi-Samuel will be one.

New manager Carlos Corberan comes highly rated from Marcelo Bielsa’s Leeds. Good thing, too, as he needs to address Town’s slow starts to matches, tighten them up at set-pieces and make the side less reliant on last term’s top scorer Karlan Grant for goals.

In a season that saw the Robins dead last in the Expected Points table (a reflection of xG chances at both ends), a top-half finish flattered them. Frustrated fans can hope that Niclas Eliasson, underused by Lee Johnson, may link up nicely with Nahki Wells.

Birmingham have cause for cautious optimism, with their financial black hole partly filled by the Jude Bellingham millions and their defence set to be improved by the arrival of Aitor Karanka (and departure of Lee Camp). Expect gradual recovery.

This young, hungry squad has enough to avoid relegation even if Gerhard Struber does leave. If, however, the Austrian stays, works his magic and keeps the defence as tight as it was after lockdown, then the sky – or at least mid-table – is the limit.

Although Mark Bowen eked out better results, if not better performances, supporters weren’t convinced – and neither was the xG table. Reading need star keeper Rafael to be less busy, although the bigger worry is losing John Swift in addition to Ovie Ejaria.

A year later than planned, Luton start a Championship campaign under Nathan Jones. He should benefit from being able to sign his own players, especially in his vital full-back roles, and from Simon Sluga giving up his weekly howler habit. It’ll still be tough.

With promoted sides finding the second tier harder than ever, you worry about 14 of Cov’s 18 wins last term being by a single goal. Matt Godden will have to hit new heights. Still, the defence is solid, their signings positive, and being at St Andrew’s hasn’t fazed them.

Rotherham return – again – but unless they replace Dan Barlaser, fantastic on loan as the Millers came back up last season, they’ll struggle – again. While they did amass 25 set-piece goals, a fair few more than second place’s 15, erratic home form is a problem.

Wycombe have wandered into dreamland, thanks to Gareth Ainsworth, chairman Rob Couhig and a strong team spirit. They’ll fight, and score from corners, but the step up is enormous for this squad. OK, Gaz, you can pin this up in the dressing room again...

Horrendous home form, reliable performers opting to leave, and then a points deduction: 2020 is not a happy year at Hillsborough. Starting on -12, Wednesday will require a comfortably mid-table points tally just to stay up this season. Are they good enough?