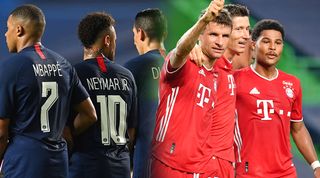 Ten minutes on the clock, 130 clubs to guess.

NOW TRY Quiz! Can you name the former clubs of the most valuable 20 players on Earth?

They conceived the European Champion Clubs' Cup, a brand new tournament to find out who the best clubs in Europe were. Win your domestic title, and you would be invited to this starry new tournament.

Can you tell us the finalists in the European Cup - later the Champions League - since 1992?

RANKED! The biggest Champions League knockout victories of all time