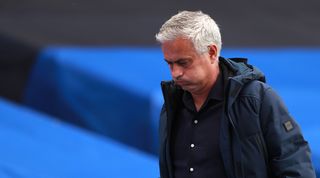 When Tottenham Hotspur first invited the Amazon Prime cameras into their swish training complex, they had no idea of the season that was going to follow.

Mauricio Pochettino out, Jose Mourinho in, Bayern Munich 8 - Spurs 2, COVID-19, top six scraps and cup upsets all feature in the doc, as Tottenham's dramatic season takes one twist after another. All Or Nothing: Tottenham Hotspur is the TV show of the summer - sporting or otherwise - and it's on the lips of every football fan on the internet.

If Spurs isn't for you though, there are plenty of other fantastic documentaries to take your pick from on Amazon. Here are some of our favourites.

If you've not got Amazon Prime yet, then here's how to get the first month for FREE

Sir Stanley Matthews, "the Messi of his day", was more than just a footballer. The former Stoke City winger helped to bring the beautiful game to some of the country's poorest, and remains the only person to be knighted while still playing. This is the story of his remarkable life, told by loved ones, fellow players and journalists. A football documentary with a gently beating heart.

One for the lovers of sub-titled hipster cinema. Six Dreams follows the fortunes - the highs, lows and all the grey area in between - of six "characters" in the Spanish top-flight. Amazon get exclusive access to a coach, a sporting director, a club president and three players over the course of the 2017/18 campaign. The six-part series makes for truly fascinating viewing, as each struggles in their own way with the pressures, pains and elation of professional football at the very top level.

Johnny Owen entered the world of football documentaries with the superb I Believe in Miracles, covering Brian Clough’s European Cup exploits at Nottingham Forest. His piece on Wales’ extraordinary run to the European Championship semi-finals is less remarkable, but remains a must-see for Welsh fans.

Amazon launched this original production at the start of this season, the first in which games will be streamed live on Amazon Prime. Although the online reviews of Back of the Net suggest it is ideal viewing for someone who uses the word ‘banter’ non-ironically, the calibre of guest is genuinely excellent. Gabby Logan, Peter Crouch and John Bishop host.

Although its content feels a little more PR-orchestrated than alternative football documentaries - Marcelo Bielsa doesn’t tell Pablo Hernandez to bring his f**king dinner - Take Us Home is an enjoyable watch, especially for Leeds fans. Bielsa’s Leeds make for compelling viewing on and off the pitch, and the human side of players and obsession of Leeds’ fans are well represented. It’s also narrated by Russell Crowe, which is nice.

Sean Connery narrates this glorious retelling of the 1982 World Cup, dripping in 80s nostalgia. The footage is beautifully shot and edited and makes for 97 minutes of sheer delight. Rick Wakeman of Yes also produced an original score for the film, but don't let that put you off. The majority of FIFA’s official World Cup films are available on Amazon Prime.

An emotional and inspiring documentary that follows former Newcastle player Robbie Elliott and his friend Phil Gray as they take on a 25-day, 3,500 mile cycle in aid of the Bobby Robson Foundation. Once More for Bobby features contributions from some of Robson’s star players such as Gary Lineker, Paul Gascoigne and Alan Shearer.

The documentary that Madrid’s captain was famously filming as Ajax shocked Los Blancos at the Bernabeu, El Corazon de Sergio Ramos (Sergio Ramos' Heart in English) is almost indescribable. The trailer alone features Ramos getting out the guitar, David Brent-style, wearing a variety of colourful outfits and enjoying Kardashian-esque staged family moments with his wife Pilar Rubio. There’s a whole episode entitled ‘Music’. Just watch it - with subtitles (unless you speak Spanish).

Written by future Broadchurch creator and Doctor Who showrunner Chris Chibnall, United has a stellar cast, including David Tennant, Dougray Scott, Jack O’Connell and Sam Claflin. The film, first broadcast by the BBC in 2011, sensitively covers Bobby Charlton’s ascent to the Manchester United first team, the 1958 Munich Air Disaster, and assistant manager Jimmy Murphy’s response to the tragedy. It also serves as a convincing window into football’s identity in a bygone era.

A tremendous all-encompassing look at football from South Africa’s youngest professional referee to Lionel Messi’s brilliance, across six distinct episodes, This is Football reminds you why you love the beautiful game. The series touches on wonderful eclectic stories that would be otherwise overlooked, and more mainstream topics as well, with football’s visceral emotion in each story’s core.

The series that arguably started the football documentary zeitgeist we’re living in, All or Nothing: Manchester City is a fascinating insight into the operations of a cutting-edge football club, and its unique generation-defining manager. It may not have the raw emotion of a tragicomedy like Netflix's Sunderland Till I Die, but it’s a great watch nonetheless.

Based on Graham Hunter’s excellent 2012 book Barca: The Making of the Greatest Team in the World, Take the Ball, Pass the Ball is a passionate love letter to the most iconic team of the 21st century. Its contributors could not be of a higher calibre, and the film is a testament to the unparalleled football played by Pep Guardiola’s side. A treat for all lovers of football. A warning: this is leaving Prime on 11 December 2019.

Narrated by Gary Oldman, this 2010 feature-length documentary tells the story of England's journey to the semi-finals of Italia '90. Worth watching alone for the heartbreaking lip-read subtitles attached to Bobby Robson's on-pitch pep talk to an inconsolable yellow-carded Paul Gascoigne before the fateful penalty shootout: "Don't worry. You've been one of the best players of the tournament... You're gonna have to forget everything else. Don't worry son... You've been absolutely magnificent. Haven't you? And you've got your life ahead of you. This is your first..." Us? Crying? You bet.

"Who started it?" "I started it." This hour-long show opens with Patrick Vieira's breezy admission about the Battle of the Buffet and never lets up. Putting the former Manchester United and Arsenal captains face-to-face to discuss their rivalry was a stroke of genius – and you can find out how it was put together on this episode of the FourFourTwo Podcast.

Set in the late 1970s, Awaydays is a hooligan film starring Stephen Graham (This Is England, The Irishman, Snatch, Gangs of New York) that, according to screenwriter Kevin Sampson, had a budget so low they couldn't even get Greggs to do the catering. Following the exploits of 19-year-old Paul, who joins Tranmere's hooligan firm The Pack, this features one of the greatest soundtracks ever – and the story of how the soundtrack was put together is almost worthy of a film in itself.

While you’re here, why not take advantage of our brilliant subscribers’ offer? Get the game’s greatest stories and best journalism direct to your door for only £12.25 every three months – less than £3.80 per issue – and you’ll also receive bookazines worth £29.97!

QUIZ Can you name every club to reach a Europa League or UEFA Cup final?