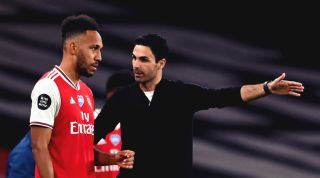 In December, Arsenal lost 2-1 to Chelsea at the Emirates Stadium, having taken the lead. Even in the worst times at Arsenal, under Unai Emery and Arsene Wenger alike, that just didn’t happen. The Gunners had not lost a home game from a winning half-time position for almost a decade; it wasn’t a good look for new boss Mikel Arteta.

But the rookie was forgiven. It was a tough ask, and this was never going to be a quick fix. Now though, Arsenal face Chelsea again - this time in the FA Cup final - off the back of slaying both Manchester City and Liverpool in the space of the week.

It’s not just the results that are impressive either: the Gunners have been defending with strength in numbers, taking chances in front of goal and chasing down opponents to force errors. Jesters have become kings in the backline; Granit Xhaka has gone cumbersome to cornerstone; the smile has returned to Pierre-Emerick Aubameyang’s face.

If Gooners wrote off Mikel Arteta and his side after the 2-1 loss to Chelsea, they’re no doubt eating their words now. There’s optimism at the potential of a 14th FA Cup - and perhaps more importantly, signs that the Arteta era is starting to blossom.

Arsenal have eight players within their ranks capable of playing at centre-back, while two others - Konstantinos Mavropanos and William Saliba - are out on loan in Europe. The problem isn’t that they don’t have defenders - it’s that almost every one is a walking timebomb, waiting to explode with a dodgy back-pass, sliced clearance or obvious hack when an opponent’s through in on goal.

This was Mikel Arteta’s first issue to solve and he’s done admirably. Arsenal’s back four has looked surprisingly good since Christmas - but since Arteta has opted for a 3-4-3, Arsenal have looked almost Dycheian.

The deep block has limited the number of individual errors, and stranger still, Shkodran Mustafi looks reborn as a new-age Tony Adams, barking at his team-mates and cutting all banana skins from his play. You have to wonder what exactly Unai Emery was practising on the training ground day in, day out.

Aubameyang and Lacazette are being played in their best positions

It’s been controversial that top-scorer Pierre-Emerick Aubameyang has been favoured on the left-wing by Arteta, while Alexandre Lacazette’s patchy form this season has thrown his place in the team into question, too. Arteta himself, though, says that this choice is down to working with what he has.

“We're just trying to adapt to the situation that we have,” Arteta told FourFourTwo after the Gunners beat West Ham 1-0 in the final game before lockdown. “We’re trying to create an amount of goal threat that can be successful for the team.”

Arteta may not have found the perfect solution yet, but this week has highlighted why both Aubameyang and Lacazette are suited to their roles in this reborn Arsenal side. Lacazette’s hold-up play and movement has been exemplary in the last two games, while Aubameyang’s Thierry Henry-esque winner against Manchester City typified the benefits of a pacy goalscorer out wide. Whether either of them stays remains to be seen: this must be the template for the club going forward, though.

Bernd Leno has a fight on his hands for the No.1 shirt

Bernd Leno had been Arsenal’s player of the season, prior to his injury against Brighton: as much as that’s high praise for the German’s contribution though, it’s also an indictment of the rest of the squad.

Seemingly only at Arsenal because someone forgot to move him on, Emi Martinez has waited patiently for his turn. Eight years and six loan moves later, he’s looking like serious competition to Leno. His distribution is excellent, he’s arguably better in the air than his rival and – as shown by a 95th-minute save against Liverpool to confirm the Gunners’ three points last week – his reactions are superb. What’s more, he seemingly loves the club: he’s a cult hero in-waiting.

Arsenal are in the unheard-of position now of having not one, but two good goalkeepers. It’s not a foregone conclusion that Leno walks back into this side.

Matteo Guendouzi will not be hugely missed

When the walls of Unai Emery’s Arsenal reign were starting to crumble around him, Matteo Guendouzi was an unlikely pillar of strength, dragging the Gunners through difficult fixtures by carrying the club on the young shoulders that his bouncy perm falls down beside. It seemed like the 20-year-old was a born leader and someone for the next manager to build around.

He’s had his problems with Arteta, but on the basis of the last two results, Arsenal will be absolutely fine if the Frenchman decides to leave the club. While he offers a fiery presence in the centre, he thrives on chaos. Arteta clearly wants to build this side on sturdier foundations - and if Guendouzi fetches a sizeable transfer fee, perhaps Arsenal can bring in someone equally talented who actually buys into Arteta’s philosophy.

Arteta has the pragmatic bone that Pep arguably doesn’t

Hands up: who assumed that Mikel Arteta - a student of Pep Guardiola, former captain under Arsene Wenger and product of La Masia - would lose big games wanting to play the right way? That his teams would try passing the ball into the net whoever was guarding it, like headstrong soldiers marching into unwinnable wars?

Arteta spoke of his philosophy when he arrived at London Colney, but it’s clear he knows he can’t always have things his own way at Arsenal. This week’s performances have been mature, measured and patient: Arsenal’s boss is pragmatic when he needs to be, which will certainly impress fans who watched big teams batter Wenger’s sides in the latter years.

Pep Guardiola's defeat means Arsene Wenger will remain the only manager to win more than one FA Cup between 2000 and 2020. 15 managers (including Arteta / Lampard / Solskjaer) will have won it once in that time, Wenger six times.July 18, 2020

Ainsley Maitland-Niles has to stay

Rumours have begun to surface about Ainsley Maitland-Niles’s future at Arsenal. He’s been ticked off for time-keeping, allegedly didn’t want to play right-back, then confirmed he doesn’t mind playing anywhere - before reports came out last week that he believes his manager doesn’t trust him and that he’s open to leaving north London.

Let’s be clear about something: Ainsley Maitland-Niles should not be sold.

The Hale End graduate hugely impressed as an inverted right-back under Arteta, and on Saturday, he shone on the other side, keeping Riyad Mahrez quiet. He’s Arsenal’s best defender in one on one situations: whether the Gunners make a right-back out of him, he becomes a midfielder or he’s even a winger, Arteta must keep hold of him. He’s an asset to the squad and has superb potential.

Arsenal have solid options on the left

“With the squad balance that we have at the moment, we don't have five players to play on the positions on the left,” Arteta told FFT in March. “We are using [Bukayo Saka] to play as a left-back and he is not a left-back.”

Fast-forward four months and the left-hand side of the pitch looks rosy for the Gunners. The 3-4-3 might be a short-term fix, but the likes of Tierney, Xhaka and Aubameyang have been the most reliable performers of late for Arsenal. Saka may not be a left-back - in the words of Arteta - but he’s been superb in every position on that flank, and then there’s Pablo Mari, the club’s new left-footed centre-back, who’s yet to be integrated.

Arsenal still have quandaries at centre-back and central midfield, while the right-back slot is still up for grabs - not to mention the questions of how to get the best from Nicolas Pepe and whoever starts as the main striker. Arteta will be encouraged by the players already stamping their authority on places, though: it certainly makes overloading on the left a better weapon for the Gunners.

Arsenal’s biggest worry isn’t at the back: it’s in creativity

Dani Ceballos has been excellent lately for Arsenal - he’s looked calm in possession and worked doggedly without. But he can’t do it all on his own.

Arsenal have conceded far fewer goals under Arteta, but they’re not creating high-quality chances. Having lost 15 points from winning positions under the Spaniard, it’s clear that they need to kill games off before their fatigue sets in. Ceballos and Xhaka provide good thrust forward from midfield, but there’s still more to come from the Gunners creatively.

There are a few options. If Aubameyang leaves, it might be a good idea to replace him with a left-winger more capable at creating as well as scoring - someone in the mould of Sadio Mane, who stung Arsenal last week for Liverpool’s opener. If Arteta moves back to the 4-2-3-1, a new No.10 might be needed in Ozil’s position. Equally, Nicolas Pepe has to be supported more - his assist against Manchester City was an example of his vision - while if Lacazette goes, then maybe a deep-lying striker capable of playmaking should be acquired.

In the grand scheme of problems, however, this is a fun one to have for a progressive coach with a young squad packed with pace, verve and a willingness to put the miles in. This week, the core of Arsenal’s new era stood up to be counted - now’s the time for Arteta to build the rest of his team around those leaders.

RANKED The 20 worst Premier League teams ever – by points total