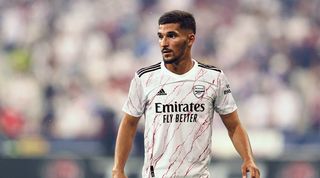 Manchester City are busy chasing Lionel Messi. Manchester United have had a bid accepted for Donny Van de Beek. Chelsea are trying to tie up Kai Havertz and Liverpool Thiago Alcantara - leaving Arsenal to try and tempt Houssem Aouar to the club.

If it's true that Aouar favours the Premier League and that Arsenal are bidding for the talented Lyon midfielder, this could be a turning point in the Mikel Arteta revolution. Aouar is a naturally creative right-footer, capable of splitting defences, dribbling and helping in the build-up. But just how would he fit into the Gunners' plans?

We've come up with four possible solutions - this is on the understanding that Emi Martinez keeps his place in goal, Alexandre Lacazette, Matteo Guendouzi and Ainsley Maitland-Niles leave, Pierre-Emerick Aubameyang stays and even incorporating the latest signing Gabriel.

This is ideally how Mikel Arteta would start the season.

Thomas Partey is a longterm target for Arsenal - though he can dictate play in the centre of the pitch, his athleticism and ability to cover ground would be a superb shield alongside Granit Xhaka for a dynamic front four. This is essentially how Arsenal started life under Arteta - with Mesut Ozil as a No.10 in front of Xhaka and Torreira - only Partey and Aouar are big upgrades on the pair.

Of course, this midfield can play a lot flatter, in a 4-3-3. Essentially though, these three players - with the depth of Dani Ceballos to come in - would be the first choice to progress the ball up the field.

Should Aouar arrive and the Partey party fail to materialise, Arteta could well use the 3-4-3 formation of the last few months well into the 2020/21 season. Of course, he probably will anyway, given that that's what Arsenal are used to right now.

Aouar isn't naturally suited to a two-man midfield. He prefers having the cover of another man in the centre with him, but given how Dani Ceballos has developed at Arsenal, there's no reason that Aouar - only 22 years old, by the way - couldn't develop into quite the progressive pivot partner for Xhaka. The Frenchman is arguably a much better footballer than Ceballos.

Aouar is competent in the first and second phase and can break lines with his passing. He enjoys driving forward and though this isn't the ideal formation for him, it's certainly a great option in big games.

As mentioned, Aouar is good as the most progressive of three midfielders. Arteta hasn't often played with a 4-3-3 for Arsenal - preferring to craft passing triangles from a double-pivot's angles - but suppose he wanted to go full Guardiola at Arsenal with Aouar?

This is the role that Aouar most often operates in for Lyon. Arsenal, however, do not have the beef in midfield to quite make it work. Sure, Xhaka has been a No.6 for Arsenal before and on the front foot, this could be a very fluid set-up, but it's also very open and not very physical in midfield. That could all change though, with the introduction of a bruiser in the middle of the pitch.

We're going for Joe Willock here in midfield over Ceballos, on the understanding that Arteta could mould him into more of a Wijnaldum-type who keeps positionally-sound for this midfield. Why not, eh?

Aouar loves to drive, is competent in the halfspaces and can pick a ball in the final third. He's not played a winger often in his career, but he could sure turn his hand to the position if needed.

Bukayo Saka in the LCM position worked to a tee against Southampton earlier in the season. Here, Aouar is complemented by the young Englishman inside and Kieran Tierney on the overlap. It's a nice option for spamming balls into Pierre-Emerick Aubameyang, even if Aouar isn't really a natural wide-man.