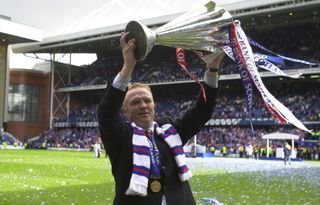 Rangers haven't always played second fiddle in the Scottish Premiership. Celtic may be bidding for a tenth straight title this season, but it wasn't long ago that it was Rangers who dominated things above the border.

Indeed, the Gers even bagged a historic treble in the 2002/03 season under the careful guidance of manager Alex McLeish. But the Scot informed the October issue of FFT - which you can order here - that he wasn't the obvious choice for the position.

IN THE MAG Inside the new Manchester United, Pirlo the manager, Rush, Drogba, Bury, Belarus, latest signings and more

"I think a lot of people were quite surprised that I got the job," he recalls. "It looked more likely that Rangers would employ a manager from England or abroad – that was their status.

"But I’d done good work with Motherwell and Hibernian as a young, upcoming boss and that earned me the Rangers job. I inherited wonderful players, such as Claudio Caniggia, Arthur Numan, Barry Ferguson, Lorenzo Amoruso, Ronald de Boer and many more. Dick Advocaat – who had moved upstairs to become the sporting director – and the owner, David Murray, put faith in me."

He may not have been the clear pick among fans, but he soon won them over. Following his arrival midway through the 01/02 season, his first full campaign in charge saw Rangers transformed into a winning machine.

"In the first 18 months, we lifted five trophies," remembers McLeish. "I’ll never forget the final day of the 2002-03 season, when we beat Celtic to the league on goal difference [by one]. We were constantly updated about their score at Kilmarnock, and it was such a dramatic day – amazing to experience."

Rangers also bagged the Scottish and League Cups to complete the Treble that season, but the dominance wouldn't last.

"From the day we won the Treble, we were downsizing," McLeish tells FFT. "Numan retired, Amoruso and Ferguson signed for Blackburn, and Neil McCann moved to Southampton. It was a mass exodus of quality players."

Some misguided signings allowed Celtic to regain control in the 03/04 season, but McLeish corrected those mistakes the following year.

"After we lost several players in 2003, we recruited experienced, well-known players at the last moment, and it didn’t work out for us," he reflects. "I prefer to plan things in advance.

"The following season, I prepared better by watching players who would be out of contract that summer. I knew that Dado Prso, who was doing really well with Monaco in the Champions League, would become a free agent. Someone mentioned to me that he’d loved playing at Ibrox with Monaco a few years before, and felt he would like to be there one day. We spoke to his agent and he confirmed it."

Despite Scottish football enjoying a more revered status at the time, McLeish was stunned Prso was actually winning to join.

"I went to see Dado play against Real Madrid, and he ripped their defence to pieces," McLeish remembers. "I thought, ‘Does this guy really want to come to Rangers? He could probably go anywhere in Europe’. But he was so passionate about joining us, despite interest from teams such as Milan."

As any coach will tell you, forwards win you games, but defenders win you titles. That was the case as Rangers secured the the 04/05 title.

"We also got Jean-Alain Boumsong on a free transfer from Auxerre," he says. "I was amazed we signed him, too, as he was revered in France. Six months later, we sold him to Newcastle for £8m. In terms of value for money, those two were the best signings I’ve made as a manager. They were brilliant for us."

Celtic reasserted their dominance before long, with McLeish leaving to become Scotland boss in 2007.

While you’re here, why not subscribe to the mag - and get every issue delivered to your door!