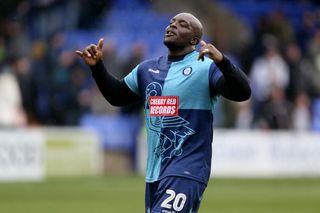 Post-playing career options are fairly limited for the vast majority of footballers: coaching, punditry, some kind of ambassadorial role?

But when you're the strongest man on FIFA with a larger than life personality, it's a whole different ball game. For Adebayo Akinfenwa, retirement from football won't signal the end of his days as an athlete.

"I sat down with the chiefs at WWE about a year ago," the 38-year-old reveals to FFT. "They wanted to know if I was going to continue playing football. I said I was and I’d let them know when I hang up my boots so that’s in the pipeline still."

So far, wrestling's loss has been Wycombe's gain, as the big man helped Wanderers achieve a shock promotion to the Championship last campaign. The objective this year is to stay in the second-flight. The Englishman hasn't revealed if this will be his final season in football, but he makes no secret of his desire to swap the pitch for the ring some day.

"Me and my kids are huge wrestling fans and we went to an event here in the UK and met some of the wrestlers after," he says. "The WWE people sat down with my people and we talked about doing something together."

Akinfenwa might be looking forward to pitting his muscle against the Undertaker, but he'd like to see a couple of players join him in the ring first.

"Who would I like to chokeslam?" He wonders. "Which footballers have done me dirty recently? No, I'm just messing. I actually think it’s one of those where you want to test your strength. Since Lukaku went to Inter he’s been looking very strong, he’s moving powerfully. Virgil van Dijk, as well, another big boy. I think we may need to have a Royal Rumble with those boys and a few others. Last man standing, let’s go!"

With Akinfenwa's body shape already closer to a wrestler's than a footballer's, FFT is curious to know how his training regime compares to that of his team-mates.

"My exercise regime is obviously different from the other players," he says. "I’ll say to the gaffer, 'Look, Fartlek training doesn't work for me, so I’ll go and do an hour on the exercise bike while the other lads do that.'

"On Monday, Tuesday, I stay off my knees. I do more gym-based stuff - the rowing machine, the cross-trainer, bikes. Then later in the week, I get outside with the lads to acclimatise my body before a game."

Letting Akinfenwa prep himself for matches clearly works - the striker has scored over 200 goals in a 20-year career and is still going strong. That trust is extended to his diet too.

"I bring my own food to training," he reveals. "I have my own nutritionist. It’s something I’ve implemented only in the past few years. I do intermittent fasting - I don’t eat anything before 1pm. I break fast with fresh fruit. Then I’ll have a workout followed by a protein shake and a salad and something healthy for dinner later on."

FourFourTwo spoke to Akinfenwa as part of GambleAware's Safer Gambling Campaign, which advises people to "tap out for time out" and aims to help gamblers avoid "Bet Regret".

"We live in worrying times - there hasn’t been football games for supporters to go to this year," he tells FFT. "We’ve been stuck at home trying to kill time in other ways at the weekends and gambling is one of the things people turn to.

"I have no issue with gambling, it’s just about helping people stop before it becomes a problem - before they regret it. I saw the campaign, with it’s “Tap Out” slogan, a phrase which has its roots in wrestling, and as I mentioned I am a big wrestling fan so I wanted to get involved. All the stars aligned and I’m proud to be part of it."

Our full interview with Akinfenwa - covering his love for Liverpool, his Hollywood ambitions and his struggles with racism and sizeism - can be seen in the November issue of the magazine, out on October 21 and available for pre-order here.

Make sure you think before you bet. Always tap out for time out and avoid Bet Regret. For tips and tools to help you avoid Bet Regret go to: https://www.begambleaware.org/