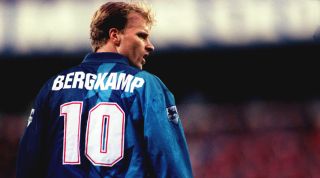 It’s difficult to chart the influence that Dennis Bergkamp had on football.

Never the quickest, never the most prolific, but with a vision unparalleled and a graceful air about him that belied the rough-and-tumble football of England in the late 90s, the Dutchman is the thinking football fan’s cult hero.

Ian Wright called him “the Messiah”. Bob Wilson claimed that he was the Netherlands’ missing piece in the 1970s and that they’d have won a World Cup with him. Nikos Dabizaz still has nightmares about him.

This month, FourFourTwo has an exclusive interview with Bergkamp, and the Ice man's cold glare graces our cover – make sure to pick up a copy now.

And while Deadly Dennis was never a style icon himself - not really - his name is a by-word for class. Not to mention the fact that he played for some iconic teams with iconic shirts…

Amsterdam is where it all started for the non-flying Dutchman. A product of the famous Ajax academy, the Dutchman learned his trade in the Eredivisie alongside the likes of Danny Blind and Edwin van der Sar.

This Ajax shirt is one that’s typically associated with that incredible generation, featuring the classic ‘ABN-AMRO’ sponsor.

Ajax have had some beautiful away shirts in recent years - including that subtle black, gold and white number that they reached the Champions League semi-finals wearing, and next season’s lush grey-ish blue strip.

But this one, in particular, is hard to beat. The yellow shoulder pattern feels quintessentially 90s and the teal colour is gorgeous. This was one of the last that Bergkamp adorned before departing for Serie A.

Do Inter Milan have the most iconic collection of shirts from across the continent? Quite possibly.

While it’s Nike and Pirelli who have been on the lion’s share of the coolest ones though, this one’s a forgotten gem. This was the away strip when Bergkamp first arrived in Italy.

Aside from the bruised banana shirt that Adidas re-designed this season - and which Bergkamp unfortunately never got to wear - this Arsenal change strip is arguably the most iconic in a long and illustrious history of yellow, blue, white and even green.

The lightning bolt design felt designed for Arsenal’s record signing, with the Dutchman electrifying the team upon his arrival.

Euro 96 wasn’t a happy time for the Dutch, really. They got whacked by the English - in possibly still their greatest tournament performance since ‘66 - and then knocked out on penalties to the French. Deary, dear.

At least they looked cool as hell. Bergkamp was still an undisputed star at that tournament and though he’s best remembered for the Argentina goal in ‘98, we’re picking this one as the nicest Netherlands top he ever donned.

A second double for Arsenal, another iconic shirt on his back.

Arguably, this shirt is best remembered for a Bergkamp moment - it was the kit that Arsenal wore on an evening trip to St James’s Park when the No.10 spun Dabizaz and produced one of the greatest goals in Premier League history. Fluke? Nah. No way.

Dennis Bergkamp was already an immortal in the eyes of Gooners. He merely confirmed his status as invincible too, in 2004.

By this point in Bergkamp’s career, he was the orchestrator for the likes of Ljungberg, Pires and Henry; the calm, composed figure on the pitch interlinking the other geniuses around him. This has gone down as one of Arsenal’s nicest-ever home shirts too.

In Arsenal’s final season at Highbury, the club organised every matchday into a specific ‘day’ - there was Celebrations Day, North London Derby Day… and Dennis Bergkamp Day.

Everyone in the ground was given a free orange shirt. While the man on the pitch wore the beautiful redcurrant commemorative top for Highbury - and scored, that day, naturally - it showed just how much the Dutchman meant to Arsenal. A true legend of the game.