Pundits say England looked “leggy, one paced and short of ideas” and questioned why it didn’t use Phil Foden in its 0-0 draw with the United States in the World Cup.

Gareth Southgate’s side remains at the top of Group B, but a win would’ve all but locked in a spot in the final 16 of the tournament as it was booed at full-time after the limp showing.

It comes after England thrashed Iran 6-2 in its opening game, but The Three Lions didn’t come out with the same intensity on Saturday including nearly conceding to USA in a one-sided first half.

Southgate’s decision to keep 22-year old Manchester City star Foden on the bench for the entirety of the game has particularly turned heads given England lacked urgency and a spark in attack.

“Tournaments are very rarely a bed of roses all the way through. Gareth has got unbelievable tournament experience and I think he’ll recognise that they’ll get through this group,” former England player Garry Neville said on ITV.

“But, it was poor. We’re all disappointed as we wanted a lot more from England. The clean sheet is a positive and Harry Maguire headed a lot of balls away in the second half.

“Sometimes, our midfield just didn‘t click tonight. We looked tired at times and I didn’t think we connected in midfield combinations. Their midfield was far better. I was disappointed not to see Foden.

“For me, that talent is huge. I‘ve not seen anything like it. We’ve got Bellingham and Grealish among others and Gareth prefers Mount and Sterling.

“For Foden not to be in the starting XI, and to not come off the bench was interesting.” 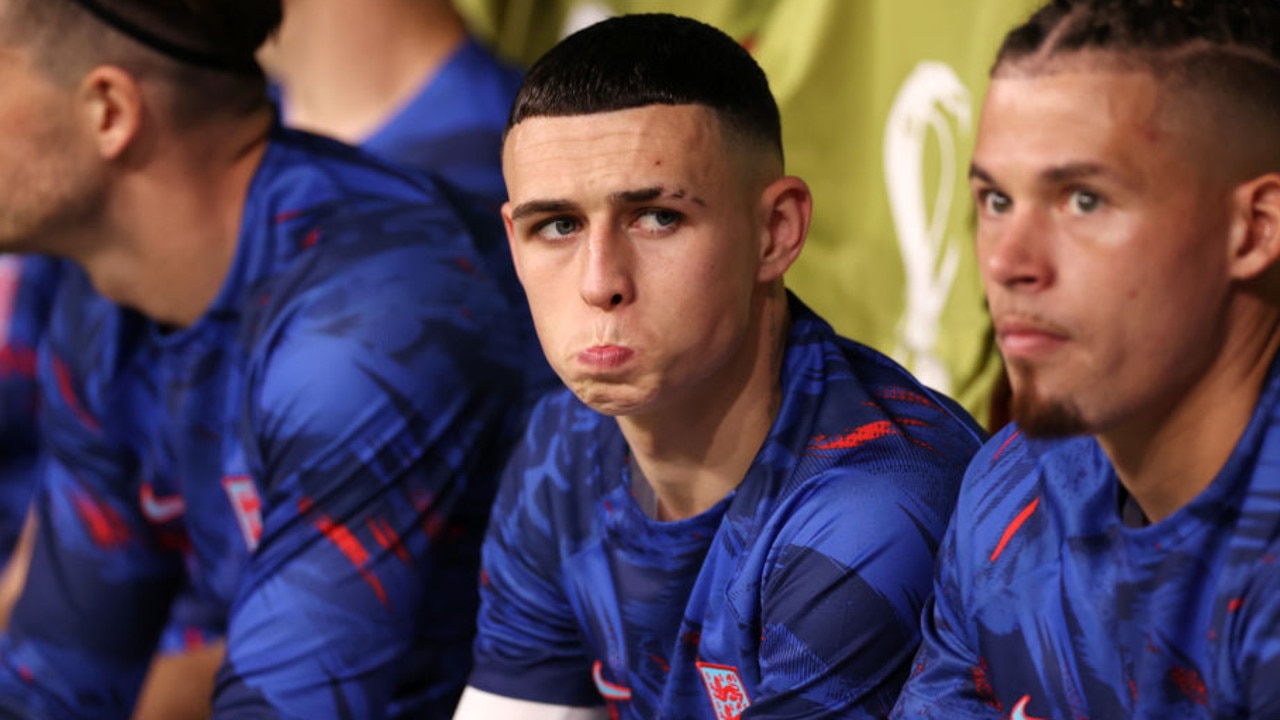 Foden watches on from the bench (Photo by Ryan Pierse/Getty Images)Source: FOX SPORTS

Neville’s view was shared by many others including Irish great Roy Keane, who questioned why Southgate didn’t utilise the young gun given it lacked energy.

“We were surprised watching (that Foden did not come on), Gareth will have his reasons, he is the manager, he knows the players better than anybody, but we were all watching the game thinking Foden, and you would fully expect Foden to come on with the options,” Keane said on ITV.

“And the subs that did come on did not really have an impact, I know they did well the other day, but England did look leggy and one paced, short of ideas. Even set pieces, you never felt they had a goal in their locker from that.

“So a terrible performance.”

Jamie Carragher, meanwhile, wrote in a column for The Telegraphthat Southgate was risking wasting a “special talent”.

“It was baffling that he remained on the bench when the game was crying out for his creativity,” he wrote.

“To be fair to Southgate, it must be acknowledged Foden has not yet produced his Manchester City form in an England shirt. The broader question must be why, and how can that be fixed sooner rather than later. Preferably in this tournament. He belongs on this stage.”

Former England captain John Terry was left “disappointed” with some of the tactical changes including keeping Foden on the bench.

“Very negative from my point of view,” he said on beIN Sports.

“I’d love to us be more aggressive and we spoke about Gareth – can he learn from his mistakes previously? I would’ve done things differently.

“How we’ve not seen Foden on the pitch tonight is beyond me – he’s one of our best and biggest talents.

“You throw him and Grealish and Rashford and those guys, it excites people and gives the team a lift. These guys are big, big stars and they need to play football.”

Southgate revealed he didn’t sub Foden on due to positional preferences.

“I didn’t think it was a game for Phil inside because there was a lot more defensive work, a very strong midfield you’re playing against,” the England boss told talkSPORT.

“He doesn’t play there normally, we brought him on as a No.10 the other day, but it’s not a position he plays at his club.

“So there’s a reason for that, without the ball.”

Another surprising move was Trent Alexander-Arnold not being used, with Neville suggesting the best countries in the tournament would’ve started both the Liverpool defender and Foden.

“I‘m torn by it as I’ve got huge respect for Gareth Southgate. He’s achieved far more than any of the other managers since Sir Alf Ramsey, but we’ve got a couple of talents there sat on the bench in Trent Alexander-Arnold and Phil Foden,” Neville added.

“In terms of opening up the game, Alexander-Arnold has got one of the best deliveries you‘re going to see from a fullback. Down that right-hand side when Marcus Rashford came on, he had Henderson and Trippier so he was blocked in a way from getting the sort of delivery and combinations you’d want.

“Those two not coming off the bench was disappointing as they‘re world-class talents. Other nations: Spain, Brazil and France – would probably have Alexander-Arnold and Foden in the starting XI.

Meanwhile, SBS commentator Matin Tyler believes both sides played not to lose late in the match.

“Maybe (England) experimented a little bit with the selection for the third game but it was a bad night to lose,” he said.

“It would have been a super night to win for both nations really. In the end, the desire not to lose, I think just shaped the destiny of the game.”

Despite the disappointing showing, England remains in control of its own destiny.

A draw in its final group game against Wales would ensure it advanced, and a victory would seal first place.

Only a loss by a four-goal margin to Wales would cost England a spot in the final 16, and captain Harry Kane noted he still thinks it’s in a “great position.”