Mitchell Duke’s clinical header in the first half helped secure three points for the Socceroos.

A spirited Australian side has defeated Tunisia 1-0 in their second Qatar World Cup match, with Mitchell Duke’s smart finish in the first half being the decisive factor in the highly competitive clash.

The result at Al Janoub Stadium on Saturday keeps Australia’s hopes of qualification alive and sees them climb into second place in Group D behind France.

Tunisia are now winless in their opening two games and lie at the bottom of the group.

Australia had won only two matches in their five appearances at the World Cup before this, and they squeezed into this edition via a playoff.

But they started on a strong foot against Tunisia, which had held Denmark 0-0 in their opener and are looking to reach the knockout stage for the first time.

The Australians dominated the first 15 minutes, without mustering a shot.

Tunisia first sniffed at goal in the 19th minute, but skipper Youssef Msakni was squeezed out, and then defender Mohamed Drager blazed over.

In the 23rd minute, Australia took the lead their possession deserved.

Craig Goodwin, who scored the opener in the loss to France, crossed from the left and the ball ricocheted for Duke to head into the net.

The Japan-based centre-forward, 31, exchanged angry words with the Tunisian bench when he was bundled over on the half-hour mark.

But the skirmish ended with him shaking substitute Hannibal Mejbri, the Manchester United teenager.

Another England-based player, defender Harry Souttar of Stoke City, made a heroic last-ditch block from the dangerous Msakni as half-time approached.

Tunisia’s fans had their heads in their hands in injury time when Msakni finally escaped Souttar, only to sidefoot wide from close range.

Coach Jalel Kadri brought off Drager at the break and replaced him with a midfielder, Ferjani Sassi, and a match that had simmered up to that point threatened to boil over. 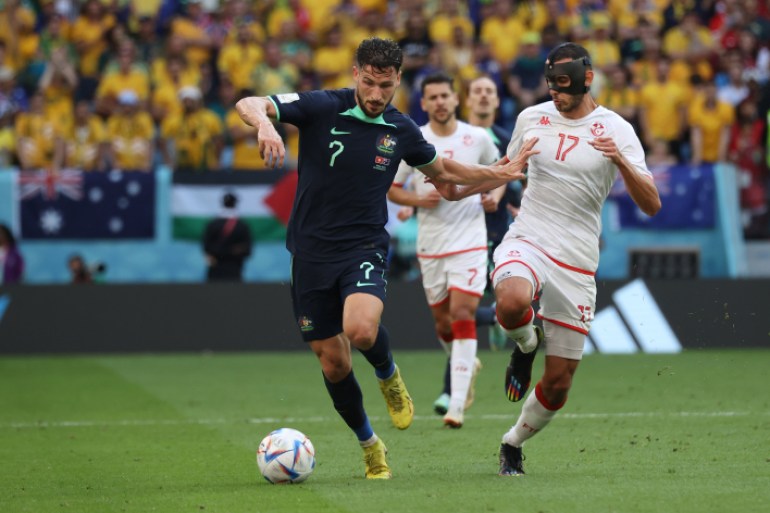 Australia were inches away from a second but Mathew Leckie could not connect with a low cross as he slid in front of the goal.

The Socceroos face Denmark – who play France later Saturday – in their final group game, with the knockout round in sight.

Previously, their best World Cup performance came in 2006 when they also reached the last 16, in the days of the popular trio: Tim Cahill, Harry Kewell, and Mark Viduka.

There are no such superstars in the team this time as Graham Arnold’s Australia produced an exceptional performance at the 42,000-capacity Al Janoub Stadium to win their first World Cup game since 2010.