Doha, Qatar – Like thousands of other Saudi fans, Muhammad al-Dabbagh travelled by car last week to Qatar to watch live the first-ever World Cup to be held in the Middle East.

“Had it not been in Qatar,” he said, “it would not have been so convenient, or affordable for me to attend a World Cup.”

And had he not made the road journey via the Abu Samra border crossing, he would not have witnessed Saudi Arabia lighting up the tournament with a massive upset against Argentina.

The Green Falcons’ 2-1 over the two-time champions on Tuesday set off wild celebrations, with overjoyed Saudi fans flooding all major tourist attractions and fan zones in Qatar. Quickly, it turned into an all-Middle Eastern party.

At the heart of it all was Doha’s Souq Waqif, where fans from different countries had gathered in a large group with their respective flags, joining in the singing and dancing. Chief among them were Qataris, who were happy to play second fiddle at their neighbours’ party after the hosts’ national team lost to Ecuador in the tournament’s opener.

“We are not sad that Qatar lost, we are happy that Saudi Arabia won,” said Bassam Muhammad, a Qatari student, as others walked by waving the flags of both countries, which restored full relations in early 2021 after a years-long diplomatic rift.

Just hours after the Saudi win on Tuesday, Tunisia pulled its own weight to hold the higher-ranked Denmark to a surprise 0-0 draw at the Education City Stadium.

Most of the more than 40,000 or so fans in attendance were rooting for the team from North Africa.

Amine, a Tunisian fan, thinks that the Arab unity on display among the supporters is not strange to see. 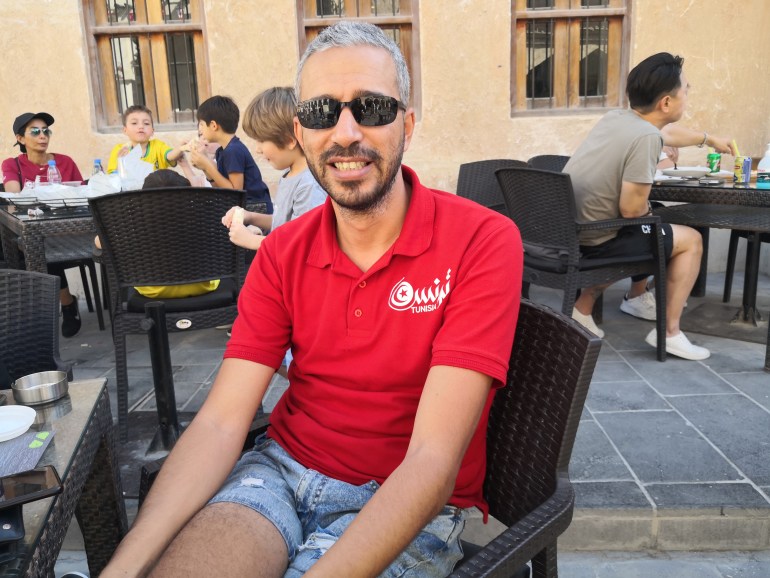 “Politics is different and people are different,” he said. “People are always united, even when leaders aren’t.”

Amine said he is a regular at Souq Waqif, where fans from Morocco, Tunisia, Qatar and Saudi Arabia congregate in the evenings to have one big party.

“Even Egyptians, Algerians, Lebanese and Omani fans are here, even though their teams didn’t even qualify for the tournament. But nobody cares.”

On the morning of Morocco’s first match of the tournament against Croatia, Doha’s central metro train station turned red as fans of the Atlas Lions set off for the Al Bayt Stadium in al-Khor.

“This is the best Mundial (world cup), and we are happy that it is in Qatar,” Rachid, and his group of friends from Oujda, Morocco said ahead of the match.

Morocco, the highest-ranked Arab team at the tournament at 22, went on to hold 2018 World Cup finalists Croatia to a 0-0 draw in what was seen as a win by their fans.

On Saturday, Saudi Arabia play their second match in the tournament at Education City Stadium, squaring against Poland in a highly anticipated affair to determine whether the Green Falcons can build on their shock opening win.

It would certainly feel like playing at home. Saudi Arabia ranks third on the list of ticket-purchasing countries for the tournament, according to FIFA sales numbers.

Some optimistic Saudi fans, like al-Dabbagh who travelled from Riyadh, say they will consider staying longer in Qatar if their team progresses.

“This is just like my country, it feels no different,” he said of Qatar. “And if my team continues winning, who knows, I might just spend the whole month here.”

Tournament organisation rules do not allow non-ticket holders to enter Qatar during the group stage matches, but they will be allowed on certain terms once the knock-out stages begin. 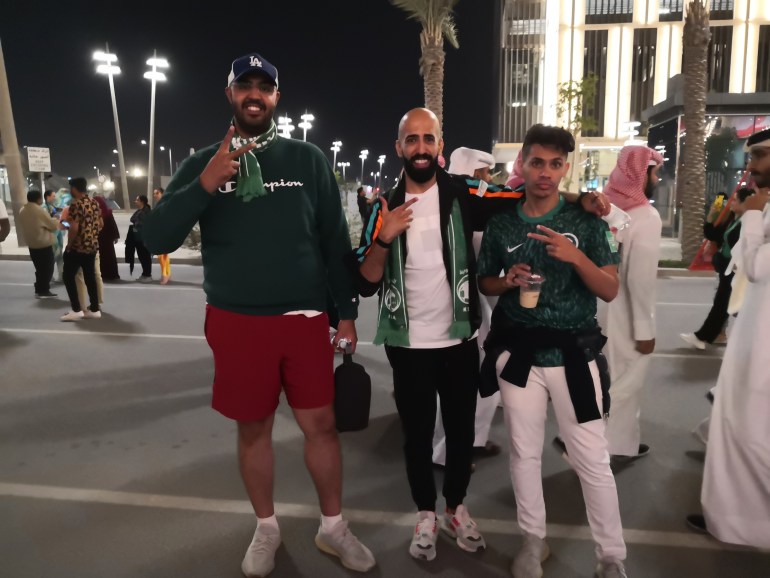 But, Qataris, despite the disappointment from their team’s early exit, promise to continue supporting the Saudi team and the rest from the region.

“We are proud of all Arab teams and we will cheer for them as they go along in the tournament,” said Asma.

In addition to the support received by participating Arab teams, the Palestinian cause has also received vociferous backing during the tournament.

Amine, from Tunisia, said it is because all Muslims identify with the cause.

“Wherever you go [in Qatar], you will see a Palestinian flag because we want to remind the world that Palestinians are not alone,” he said, adding that Tunisians typically show solidarity with Palestine whenever their team play in a major tournament.

Asma, who attended Qatar’s match against Ecuador, said every member of her family carried and waved the Palestinian flag at the stadium because they feel it is their responsibility as Muslims to tell the world about Palestine.

“I hope we can bring attention towards Palestine, and I also believe that this World Cup will help change the Western world’s perception about this about the Arab world, and not just Qatar.”